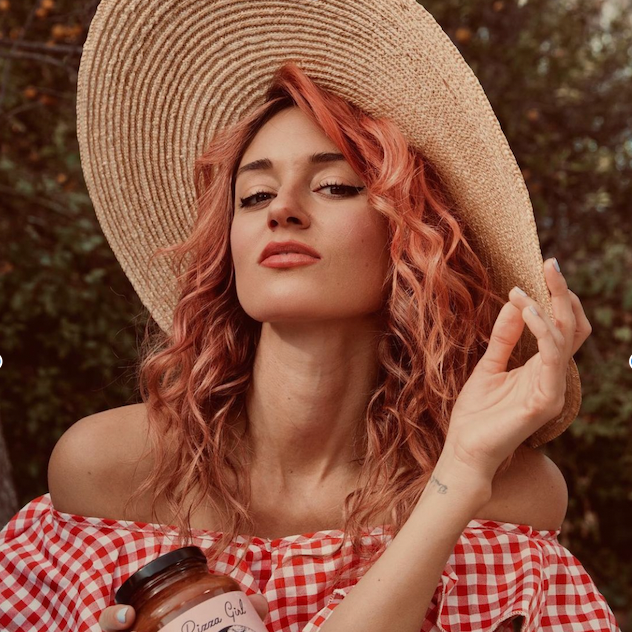 Caroline D’Amore has done it all - from slanging pizzas at her dad's restaurants, to acting, modeling, DJing all over the world with multiple record deals, and now being the founder and CEO of her own organic pasta sauce company.

Pizza Girl, Inc. can now be found in over 700 supermarkets throughout the west coast and that number is currently growing across the United States. After overcoming major personal obstacles and the COVID-19 pandemic, Caroline managed to pick herself back up and relaunch Pizza Girl in late 2021.

Caroline was born and raised in Los Angeles CA, and grew up as one of four girls. Her mother passed away when she was only five years old and life with a single dad had its clear challenges. She was often up late on school nights catering with her dad, Joe D’Amore, with his Pizza company D’Amore’s Pizza. He’d throw her in a “Pizza Kid” t-shirt and off they would go - catering film and television productions all over Los Angeles.

Joe D’Amore moved the family to Malibu to open a D’Amore’s Pizza location right on the Pacific Coast Highway in Malibu, CA. Caroline entered Malibu High School and often worked at the shop delivering, ringing up orders, and flippin pies. However as a teenager, Caroline began to want nothing to do with her “pizza girl” moniker - often being catcalled the name when she'd show up to highschool parties.

Caroline had an extremely hard time in school as she suffered from severe dyslexia and never got the help she needed in these areas. Her frustrations led her to drop out of high school and she immediately went to find work. She hopped on a plane to New York City where she slept on a friend's couch and met with modeling agencies. She signed with “Next Models” and sent magazine clippings home to her dad to let him know she was doing just fine and paying her own way. After a few run-ins with the dark side of being a young model in the city, she hightailed it back home to Los Angeles, CA to try her hand at acting.

She immediately got work in shows like “Entourage” and “90210”, a couple of movies that made it to theaters. Although she enjoyed her acting career, Caroline always knew that she was an entrepreneur at heart creating new business opportunities wherever she could. In 2021, she was the new face of MTV’s, “The Hills: New Beginnings” and has some more exciting national TV exposure coming up winter 2023.

She loved nightlife and dancing so why not become a DJ? Something she thought of one day and a few weeks later she was performing at the El Rey Theater where she caught the attention of the biggest DJ agency in town. She scored a huge residency in Las Vegas at the HardRock Hotel and two record deals with Universal and Sony. Caroline traveled to Egypt, China, Japan and more to dj. Again the dark side of the club scene came to get her and she knew she needed a change. Still not ready to be who she was born to be, she thought, a beach girl needs a Swimwear line.

Caroline launched “D’Amore Swim” and scored deals with stores all over the United States to carry her brand. She had her swimsuits on celebrities and pulled off major fashion shows all over the country. The Kardashinas even asked her to do an episode of Kourtney and Khloe Take Miami in which they walked in her D’Amore Swim fashion show and carried her line at all the Dash stores. Caroline has brand building in her blood but still something just wasn't clicking with the swimwear concept between the margins and the man power behind it. D’Amore Swim was another lesson that would help her down the road with a wealth of knowledge to start another company.

In 2015, Caroline gave birth to a little girl, Isabella, and to make ends meet had to do DJ gigs from time to time. Motherhood and djing, as you can imagine, were not compatible for very long. Being a busy single mom Caroline was searching for quick, easy, and most importantly healthy dinner ideas to feed her little one. She couldn’t find a pasta sauce on the shelves that was organic, tasted good, and that spoke to her. In this search, Caroline noticed that there was a huge gap on the shelves. The pasta sauce aisle was mostly male dominated or had some grandma on the bottle.

Caroline grew up knowing what a great italian gravy tasted like but also cared about the ingredients just like most young moms in America. She then quickly got to work and out came the now beloved Pizza Girl recipe. And what better name for the company then her once hated moniker “Pizza Girl”. Once she stopped chasing the dreams of others and really honed in on her personal needs, pulled from her own childhood memories of delicious pasta sauce she found something truly authentic and fell in love with her sauces. She has plans to go national with Pizza Girl in the next year so all young moms and dads can enjoy delicious organic pasta sauce. She is now, proudly, the Pizza Girl.

Book An Experience With Caroline D'Amore