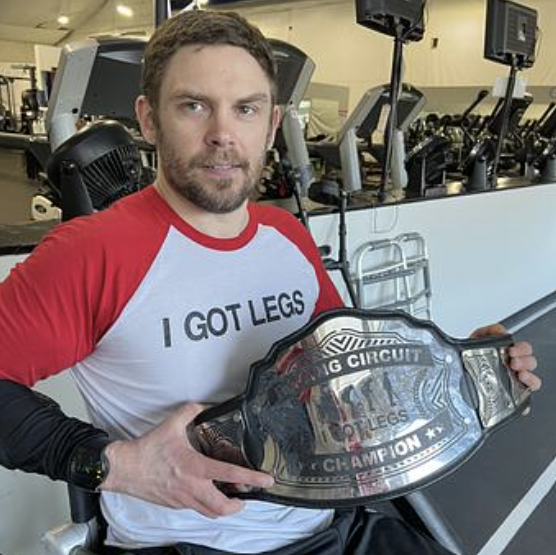 On the evening of December 30, 2005, Adam Gorlitsky was in a catastrophic car accident which left him paralyzed from the waist down. The doctors said he would never walk again. Adam grew up an athlete — played basketball and ran track and cross country, so hearing those words were devastating.

Ten years after his car accident, he was given the opportunity to prove those doctors wrong and explore a breakthrough new technology called the ReWalk robotic exoskeleton – a groundbreaking device that would allow him to stand, be mobile, and be weight-bearing again. Adam felt empowered in a way that he hadn’t felt in over 10 years; he felt like an athlete again — he felt ReEnabled!

It took Adam nearly 9 months to fundraise for his own personal ReWalk exoskeleton. His main source of fundraising came from selling I GOT LEGS t-shirts and local businesses sponsoring his efforts to use the exoskeleton to walk the annual 10k in his hometown of Charleston, SC — The 2016 Cooper River Bridge Run. An effort that would take over 7 hours and 17,932 steps to complete.

What started out as a slogan to put on t-shirts, I GOT LEGS is now a 501c3 nonprofit organization dedicated to ReEnabling the spinal cord injury with the same exoskeleton technology that has since helped me cross the finish line of 50 road races — even walking an entire marathon and breaking a Guinness World Record!

Book An Experience With Adam "The Road Warrior" Gorlitsky