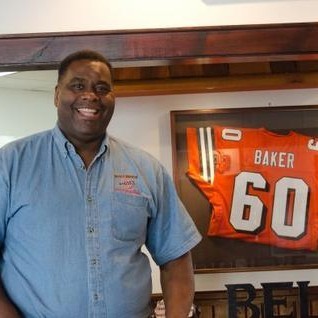 Bubba Baker made his mark early as he began his NFL career with the Lions with an incredible 23 sacks (an unofficial stat at that time) his rookie year, with five sacks in a single game against the Tampa Bay Buccaneers. This is a team record that still stands today. If sack stats had been counted from the beginning of Bubba's career he would be the NFL's all time leading pass rusher still today. Over his 5 year stint with Detriot, Baker was named to 3 Pro Bowl teams, was an All-Pro in 1978 and the NFL Rookie of the Year in 1978 alongside legendary running back, Earl Campbell. He played for the Lions for five seasons, starting 66 of 67 games. In his last season with the Lions, 1982, when sacks became an official statistic, he totaled eight point five in only nine games. He also had two career interceptions with the Lions. He played the next four seasons, 1983-86, with the St. Louis Rams, for whom his season sack totals were 13, 10, 4 and 10.5. The sack-master holds the franchise's top three all-time, single-season sack efforts. In 1983, along with the 13 sacks, he also had two interceptions.

After retiring from professional football, Bubba and wife Sabrina opened a catering business that featured traditional southern-style Bar-B-Q cuisine. Bubba also launched a series of signature sauces and dry-rubs that have won over even the toughest Bar-B-Q connoisseurs across the country. His ribs were even inspiring to Shark Tank's Daymond John, who infused Bubba's-Q with capital and connection propelling Bubba's-Q to new heights. With that enormous passion ever present, Bubba’s-Q reached the pinnacle of success in Northeast Ohio by being named Cleveland Magazine’s, Silver Spoon Award, winners “Best Ribs” and “Best Barbecue Restaurant” 2010 four consecutive years.