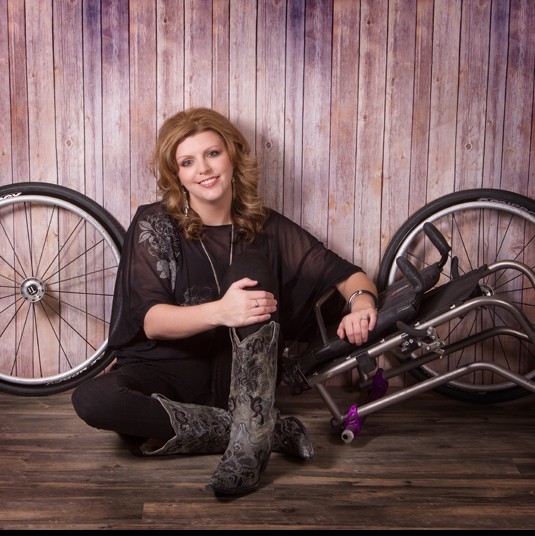 Ashlee Lundvall was an active teenager and four-sport athlete when she was injured in a ranching accident in 1999 while attending a youth camp in Wyoming. A tragic fall on to the wooden handle of a pitchfork blew out her back at T-12, resulting in a complete spinal cord injury and the introduction of a wheelchair to her life. After returning home to Indiana to finish her rehabilitation, Ashlee graduated from IUPUI in 2005 with a BS in Public Affairs, and completed her graduate studies in Biblical Counseling in 2007. In 2007, Ashlee moved to Wyoming with her husband, Russ. She quickly immersed herself in the amazing outdoor adventures provided by the mountainous region, and in 2008 helped found Wyoming Disabled Hunters. Besides hunting, Ashlee loves fly fishing, camping, four-wheeling, kayaking, hand cycling, and tearing around in her Action Track Chair. She also enjoys passing on her love for the outdoors to her daughter, Addison, who was born in 2010. Ashlee’s speaking career was reborn when she was crowned Ms. Wheelchair USA in 2013, and in 2015, she was given the Wyoming Trustee Award. Her first book, A Redefined Life, was released in February of 2016. She is a National Pro Staffer for Mossy Oak and a member of the NRA’s Disabled Shooting Sports and Outreach committees. Ashlee is also the recipient of the 2017 SCI Foundation Pathfinder Award. President Trump recently appointed her to the President’s Council on Sports, Fitness and Nutrition. Ashlee truly shines as a keynote speaker at outdoor industry and disability related events and conferences. She is passionate about mentoring newly injured patients, and loves to pass on her love for adapted outdoor recreation!

Book An Experience With Ashlee Lundvall

Book me to hone in your riflery skills!

Book A Livestream with Ashlee Lundvall