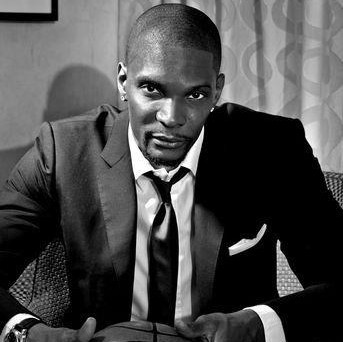 Chris Bosh is a former NBA power forward for the Toronto Raptors and Miami Heat. Originally from Dallas, Texas, Bosh was drafted with the 4th overall pick in the 2003 NBA Draft by the Toronto Raptors, after playing his college basketball at Georgia Tech. Over his 13 season, Bosh was an 11x All-Star and a 2x NBA Champion.

While in Toronto, Bosh was a five-time NBA All-Star and played for the U.S. national team (with whom he won a gold medal at the 2008 Summer Olympics), and became the face and leader of the Raptors franchise. In the 2006–07 season, Bosh led the Raptors to their first playoff appearance in five years and their first-ever division title. He left Toronto in 2010 as the franchise's all-time leader in points, rebounds, blocks, and minutes played.

In 2010, after seven seasons with the Raptors, Bosh entered into a sign-and-trade deal whereby he was traded to the Miami Heat. In Miami, he joined fellow stars Dwyane Wade and LeBron James; the trio became known as the Big Three. Bosh spent the second half of his career with Miami, appearing in the NBA Finals each year from 2011 to 2014 and winning NBA titles in 2012 and 2013. He made the NBA All-Star team every year during his time in Miami. His career was cut short by a blood clotting condition that the NBA ruled to be a career-ending illness. Bosh played his final NBA game on February 9, 2016. Notwithstanding the NBA's ruling, Bosh fought to resume his playing career for three years before announcing in February 2019 that he intended to retire. On March 26, the Heat retired his no. 1 jersey.

Seeking to promote sports and education amongst youths in Dallas and Toronto, Bosh set up the Chris Bosh Foundation and regularly speaks to youths about the benefits of reading.

Book An Experience With Chris Bosh