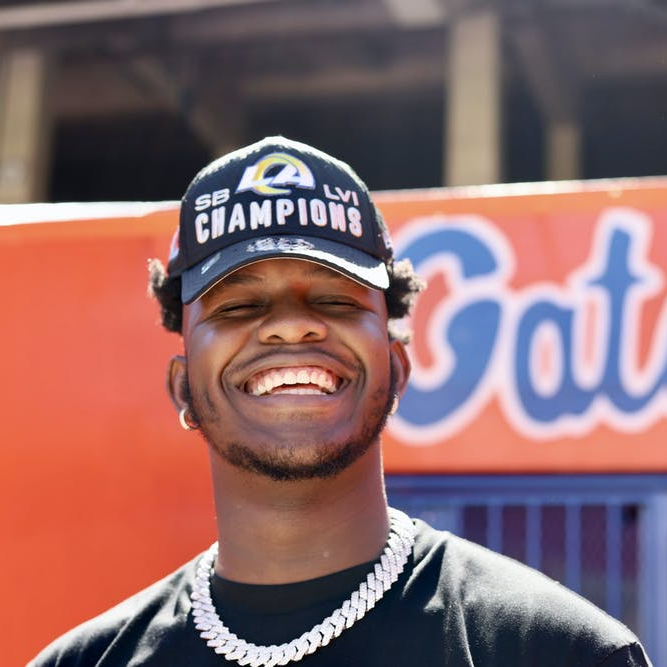 Clifford Taylor is a success story like none other with one of the most unique paths to both the NFL Super Bowl and NBA Finals in the sports world. He walked on to the University of Florida football team back in the Summer of 2019, but never saw any game time. It was his infectious and outgoing personality that truly stood out during his time with the Gators, and he was determined to connect with all the right people to establish himself as a figure in the sports industry. Pursuing a degree in graphic design, Clifford stayed as active as anyone on social media, becoming known as the “social media guy” on the team and growing his Instagram and TikTok following through sharing his experiences as a walk-on and mixing in his own sense of humor and joyous personality.

In 2021 he applied for the social media coordinator position with the Los Angeles Rams. While he didn’t get the position, everyone in the organization already fell in love with him and they still brought him on board for a social media and design position. He made a promise to the team to grow their TikTok following to 1 million, and he delivered, on Super Bowl Sunday, when the Rams brought home their second Super Bowl and Clifford’s very first. The social media sports mogul didn’t stop there. After the Super Bowl victory, Clifford went on to join the NBA working on social content for NBA Snapchat. That brought him to yet another championship celebration, getting a front-row seat to the Golden State Warriors winning their seventh championship. When he’s not celebrating championships, Clifford is as active as ever on his social media pages and stays engaged with his fans, delivering his popular comedic content on all things sports.

Book An Experience With Clifford Taylor