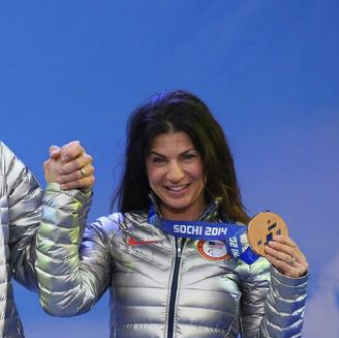 When Danelle was young, she was diagnosed with Retinitis Pigmentosa. This rare eye disease deteriorates with the end results leaving those diagnosed with it to go totally blind. At a young age, Danelle's father took the hesitant Danelle to the mountain to teach her how to ski. The rush in her body going down that mountain let Danelle focus on her abilities instead of her disabilities.

Her new love of skiing led her to meet her husband, Rob. As Danelle became blind, she would need to find a guide that could ski with her and after struggling to find a good choice, Rob eventually volunteered to take the job as he had skied competitively before.

During the 2010 Vancouver Winter Paralympic Games, Danelle and Rob became the first husband/wife visually impaired ski team for Team USA to compete and win. They continued their success during the 2014 Sochi Winter games winning Bronze then.

Book An Experience With Danelle Umstead