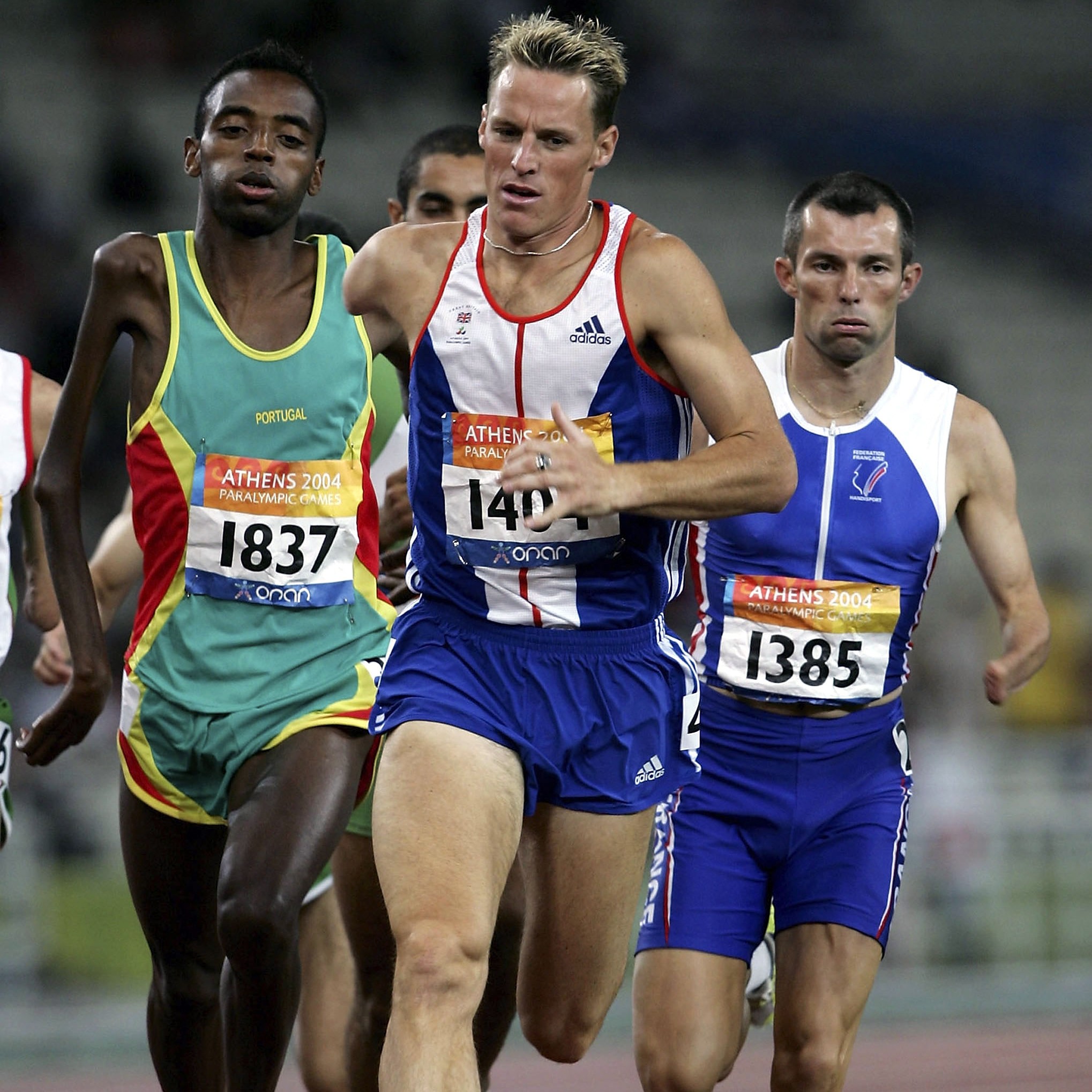 During his 12-year international athletics career, and 20 years working with businesses around the world, Danny found that sport, like life is never a simple journey, resilience is often the key to success and an individual is only as good as the team behind them.

In his presentation Danny uses a combination of personal experience and lessons learnt, he will show you that it is not just the destination that makes us champions, it’s the journey that makes us true champions. He speaks of the commitment needed to be a winner, how to set goals, and how to achieve them. All built around Danny's 5 key elements to success and his powerful and unique story from being pulled from the wreckage of a car aged 21 to standing on the podium in Athens 2004. Danny’s presentations are guaranteed to leave his audience both motivated and equipped to become high achievers.

After losing his right arm in a horrific accident at just 21 years old, Danny was determined to overcome that huge hurdle in his life, focus on the future and regain his positive attitude. Danny’s drive and determination saw him back on the rugby field within 6 months and shortly after into Paralympic sport, quickly dominating – famously winning gold in the men’s 800 metres at the Athens 2004 Paralympic Games, a year which also saw him set a new world record. It was the highlight of a glittering international career that saw Danny win every major title in the sport, including the World Championships, European Championships and Paralympic World Cup.

Since retiring from international athletics, Danny continues to build on his reputation as a leading motivational/inspirational speaker in the world of business and sport delivering keynote presentations around the world that leave his audience motivated and inspired to achieve their goals and targets both personally and within business.

Danny tailors his presentation for his audience and transfers his Paralympic success into achievable and measurable results for them, whether it be overcoming hurdles, change management, optimising personal performance and excellence, goal setting, incremental gain, teamwork or building exceptional results from failure. His presentations resonate with every department within a business or team.

Alongside his speaking Danny is a Personal Performance coach, facilitating individuals and teams to unlock their true potential. He is also a regular on TV, presenting on large sporting events such as the Paralympics and World Darts Championships as well factual programmes for the BBC including three consecutive series of BBC Food: Truth or Scare. Danny was also a contestant on Celebrity MasterChef reaching the quarter finals. He is also a published author and owner of a highly successful performance businesses called 1404 Performance.

Book An Experience With Danny Crates

Book me to deliver a keynote for your upcoming conference, appear...

Submit an inquiry if you are interested in partnering with me to...

"I just wanted to get in contact to say a huge thank you for your presentation and talk on Thursday evening. The content and messaging was extremely relevant to the sales team in the room and an excellent mixture of sentiment and humour, and everyone learnt a lot around motivating themselves, breaking down big goals into easy to manage milestones. All of the feedback has been very positive and you set the launch off to a brilliant start and got everyone into the winning mindset, so for that I am very grateful!"

“Danny Crates was one of the most inspirational guests at our recent Power to Perform week. His talk was incredibly inspiring and applicable to everybody, proving that no hurdle in life is impossible to overcome. His charm, humour and honesty were met with approval by a very engaged audience and I know that each person left having been motivated and touched by Danny’s unique story.”

‘Our yearly kick of meeting is a highlight on the calendar to motivate the commercial teams for the year ahead. However, with the challenge of Covid 19, structural changes and a virtual setting we were challenged with our normal delivery mechanism. We enlisted the help of Danny (for the second time in 7 years) to deliver an online motivational talk with a softer Q&A vodcast interaction. His personal stories and energy allowed the audience to connect with him in these difficult times. His messages of managing yourself during adversity and setting targets to maintain focus resonated through the organisation. As always Danny was a pleasure to work with and the reason we brought him back in to the team and I don’t rule out a third sales meeting!’

Since being in Lockdown and working remotely we have being trying to drive our employee engagement and boost morale within the company, we contacted Danny to host a ‘virtual’ event for all of our International employees. The event was seamless from start to finish and the presentation was truly inspiring and it was great to hear about his positive outlook on life leaving us all on a high. As a result of the event the feedback we received was phenomenal and we will definitely be planning another in the near future. I couldn’t recommend Danny enough!

It was a great pleasure to work with Danny Crates. Danny is a powerful & dynamic presenter who leaves a lasting impression. He inspired the entire team and delivered beyond expected; professional yet relaxed style and also touched people’s hearts. 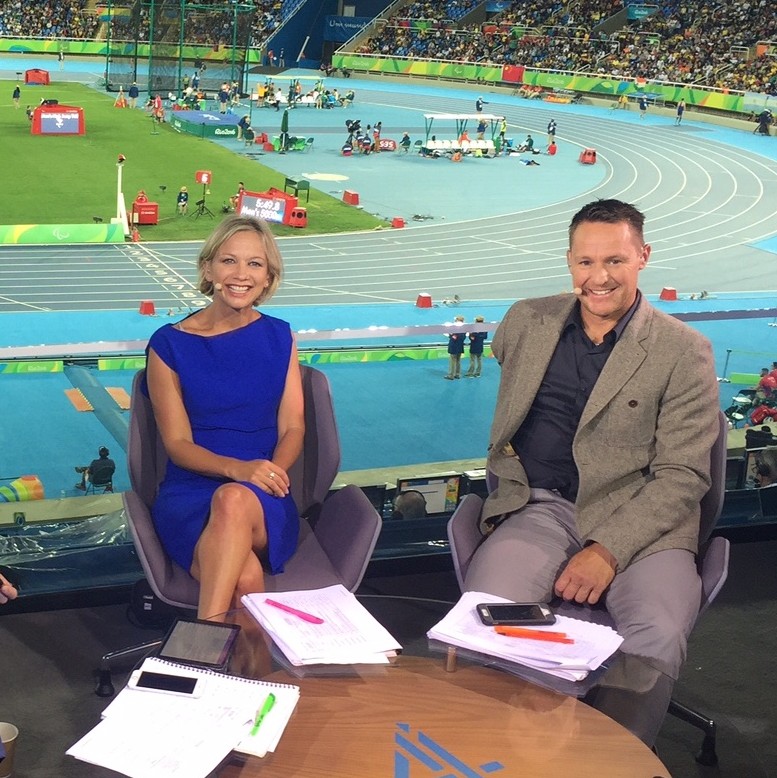 I have worked as any athletics presenter and pundit since 2011. Most notably London 2012 and Rio 2016 Paralympic Games

For my virtual presentations I deliver from a studio with full technical support. this ensures you get the same professional deliver as if I were on stage in front of an audience. 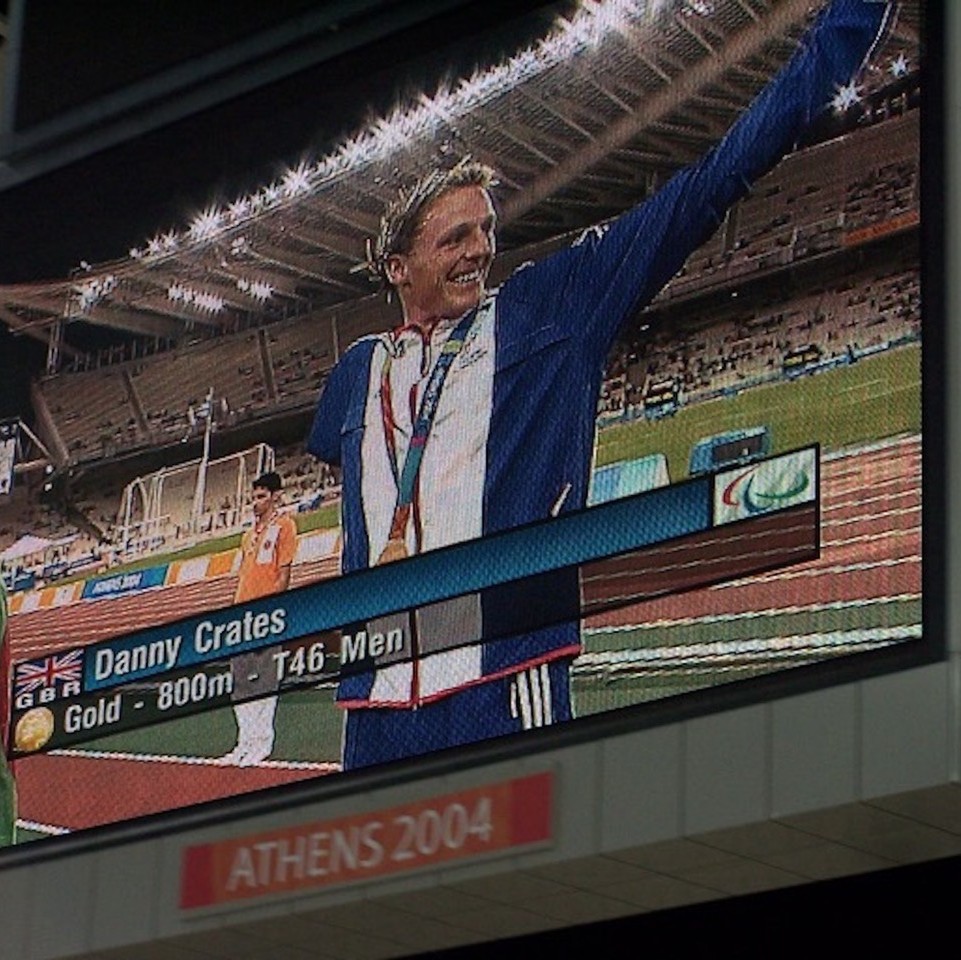 The athletes dream, standing on top of the podium in Athens 2004.