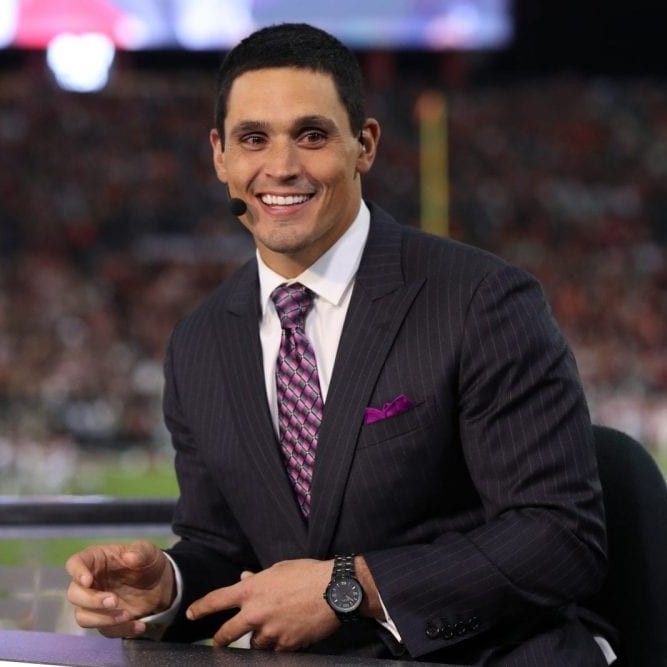 Former NFL player and University of Georgia standout David Pollack joined ESPN in June 2009 as a college football analyst. Currently, he has served as an analyst on the eight-time Emmy-Award winning College GameDay, the network’s signature Saturday morning show originating from the site of one of the day’s best games, since 2011.

Pollack is also a contributor to ESPN’s daily college football news show College Football Live and several additional studio shows throughout the season. He was previously an analyst on ESPN’s Thursday Night College Football telecast and co-host of Palmer & Pollack on ESPNU.

Pollack started his broadcast career in 2008, doing studio work for CBS and hosting a sports radio talk show in Atlanta for 790 The Zone. Since joining ESPN, Pollack has contributed to a variety of programming as a college football analyst, including ESPN’s College GameDay in 2011, as well as College Football Live and SportsCenter.

As a defensive end at the University of Georgia, he was just the second Bulldog to be named a three-time All-American. Heisman Trophy winner Herschel Walker was the first. In the 2005 NFL Draft, he was taken 17th overall by the Cincinnati Bengals.

His NFL career was cut short, however, after he broke a cervical vertebra in a game versus the Cleveland Browns in 2006. The Bengals announced Pollack’s retirement before the 2008 season.

At Georgia, Pollack’s accolades included 2002 SEC Player of the Year honors, the 2003 and 2004 Ted Hendricks Award, and, all in 2004, the Chuck Bednarik Award, Lombardi Award, Lott Trophy and SEC Defensive Player of the Year. His 36 sacks for the Bulldogs remain a school record.

Pollack, who was born in New Brunswick, N.J., and raised in Snellville, Ga., now resides in Atlanta.

Book An Experience With David Pollack

Submit an inquiry if you are interested in partnering with David on an endeavor in Me...