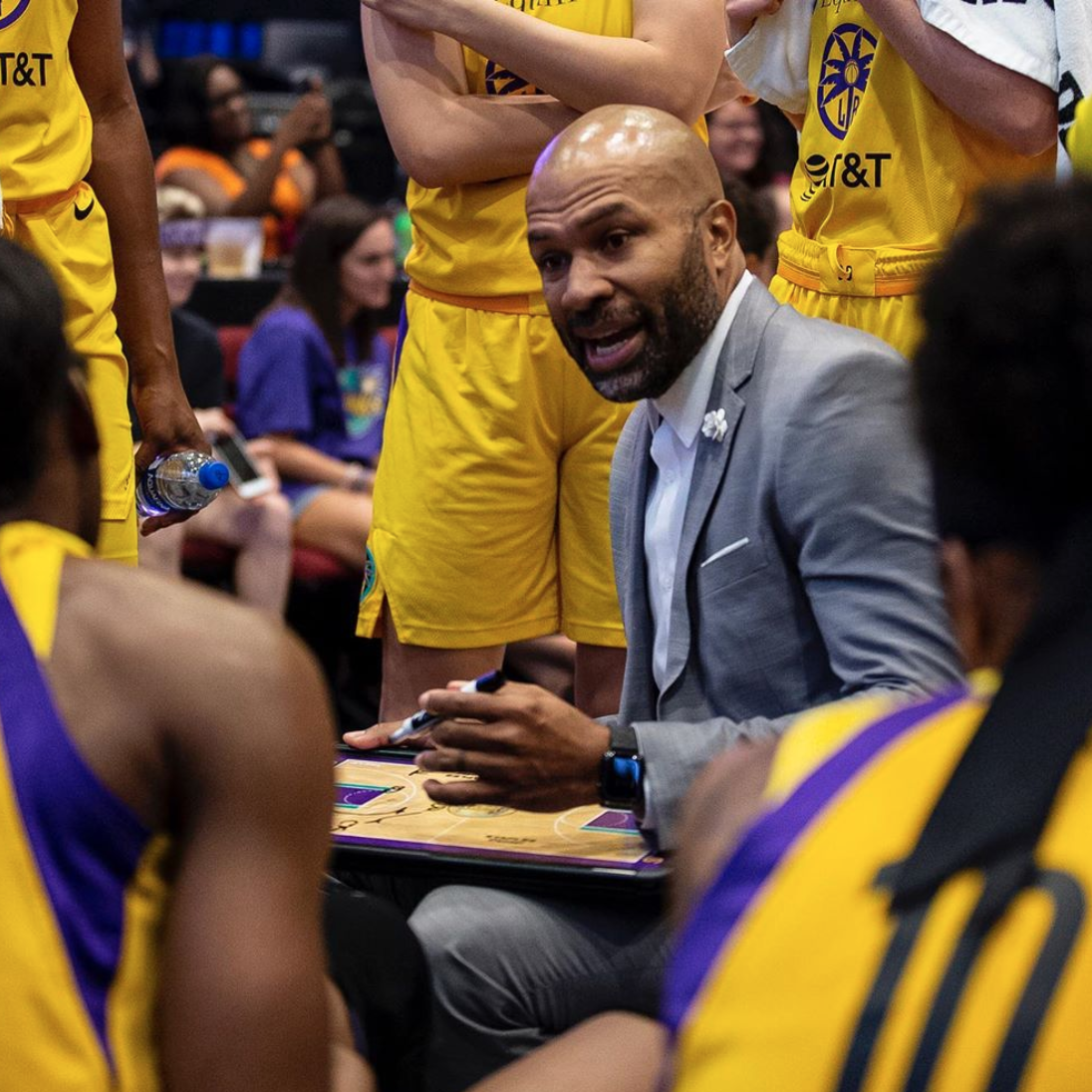 Derek Fisher is a former professional basketball player and current general manager and head coach of the WNBA's Los Angeles Sparks. Over his 18 season NBA career, Fisher won 5 NBA Championships with the Los Angeles Lakers and also spent time with the Golden State Warriors, Utah Jazz, Dallas Mavericks, New York Knicks, and Oklahoma City Thunder. He also served as President of the NBA Players Association (NBAPA) from 2006 - 2013, guiding the NBAPA through two different player lockouts. Fisher played his collegiate career at University of Arkansas, Little Rock and was the 24th overall pick in the 1996 NBA Draft. He was the Sun Belt Conference Player of Year in 1996 before being selected by the Lakers. Following his retirement from basketball in 2014, he was immediately hired as head coach of the New York Knicks, for which he served for 3 seasons. Fisher has also transitioned to the on-camera audience as an analyst for Turner Sports NBA programming and joined Spectrum SportsNet as an in-studio analyst for the Los Angeles Lakers. Fisher was named head coach of the Los Angeles Sparks in late 2018 and will begin his first season as head coach in 2019. In late 2020, the Sparks promoted Fisher to general manager as well as maintaining his duties as head coach. Fisher is also an active professional speaker and is available to be booked.

Book An Experience With Derek Fisher

Book me to speak to your conference, company, team, or convention!

Review: I have always been a D. Fisher fan. He and Scottie Pippen, Arkansas natives, have always been two of my favorite players. First and foremost, I love the history behind their travel to the NBA. Secondly, it gives credence to the fact that small town individuals can make it. More than anything, I love their down home values. When they played there were never reported incidents with the law or other such negativity. He is character driven, and showed that life lessons that are learned at home can be cultivated on the court, the field and in the arena.

Review: Mad respect to DFish. He's one of those blue collar wearing, lunchpail toting, unassuming dudes, and he's real easy to overlook. Except that, once in a while, he'll do something sublime and make you realize, all over again, that flash is no substitute for substance. Kobe and Shaq and, hell, even Robert Horry got the lion's share of accolades (and rightly enough), but Derek Fisher's contributions can't be dismissed. Fisher was the third leading scorer in those back-to-back-to-back NBA championships for the Lakers. I forget which year it was, that he got injured and missed all those games, but I remember his coming back and shooting lights out, a suddenly improved perimeter marksman. And who can forget the 0.4 miracle toss? Certainly not the Spurs. There's a reason Kobe Bryant looks for him during crunch time.