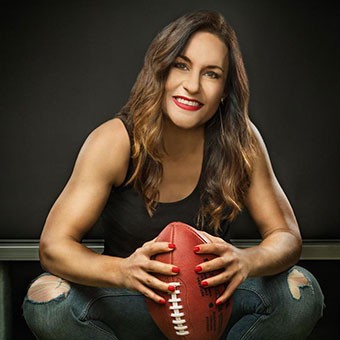 Dr. Jen Welter is the first female to coach in the NFL. In the summer of 2015, she served as a linebackers coach for the Arizona Cardinals, a period of time defined by the bonds she has formed with players. Widely known as a trailblazer and pioneer in professional football, becoming the first woman to coach in the NFL was only her most recent first. She most recently served as a defensive specialist for the Alliance of American Football (AAF).

Welter is committed to increasing access and opportunities in football. To empower women through football, Welter designed her signature program, “A Day in the Life,” Camp which debuted with the Washington Redskins women's program in 2015. She continues to create a range of camps for girls and women through her GRRRidiron Flag Football Camp, along with a number of other community initiatives like her Camp on the Corner program that brings football to youth in under-served areas. She released her first publication, “Play Big: Lessons in Being Limitless from the First Woman to Coach in the NFL” in 2017. Welter has served on the advisory board for the NFL’s Pro Football Hall of Fame Game for Life Academy since 2017. She holds a doctorate degree in Psychology, a Master’s in Sport Psychology, and a Bachelor’s degree from Boston College.

Book Jen for a speech covering one of the topics below! Divers...

Please fill out the form to request more information about Dr. Jen Welter