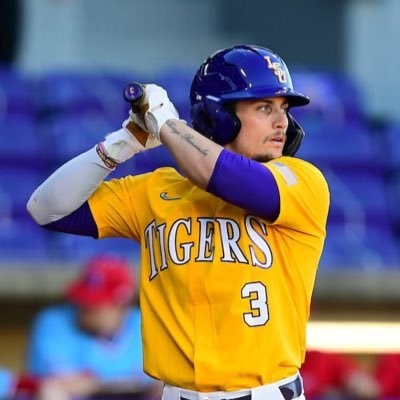 Despite heavy interest from pro ball in the 2020 draft, Dylan Crews chose to fulfill his dream to be an LSU Tiger, landed on campus in 2021 and proceeded to put up a season that earned him Perfect Game National Freshman of the Year. He hit .362 with 16 doubles, two triples, 18 homers, 42 RBI, 64 runs scored and 12 stolen bases. Crews' .362 average, as well as his on-base (.453) and slugging (.663) led the team, and his 18 homers is an all-time LSU record for a freshman. He has received Second-Team All-America, Freshman All-America, Second-Team All-SEC and Freshman All-SEC honors. Dylan wasn't finished after the regular season, as he stormed the postseason and led LSU to the NCAA Eugene Regional title, earning all-tournament honors as he batted .476 (10-for-21) with two doubles, one triple, three home runs, four RBI and six runs scored. In all, Dylan Crews is a force on the baseball field and is considered among the very brightest future MLB stars.

Book An Experience With Dylan Crews