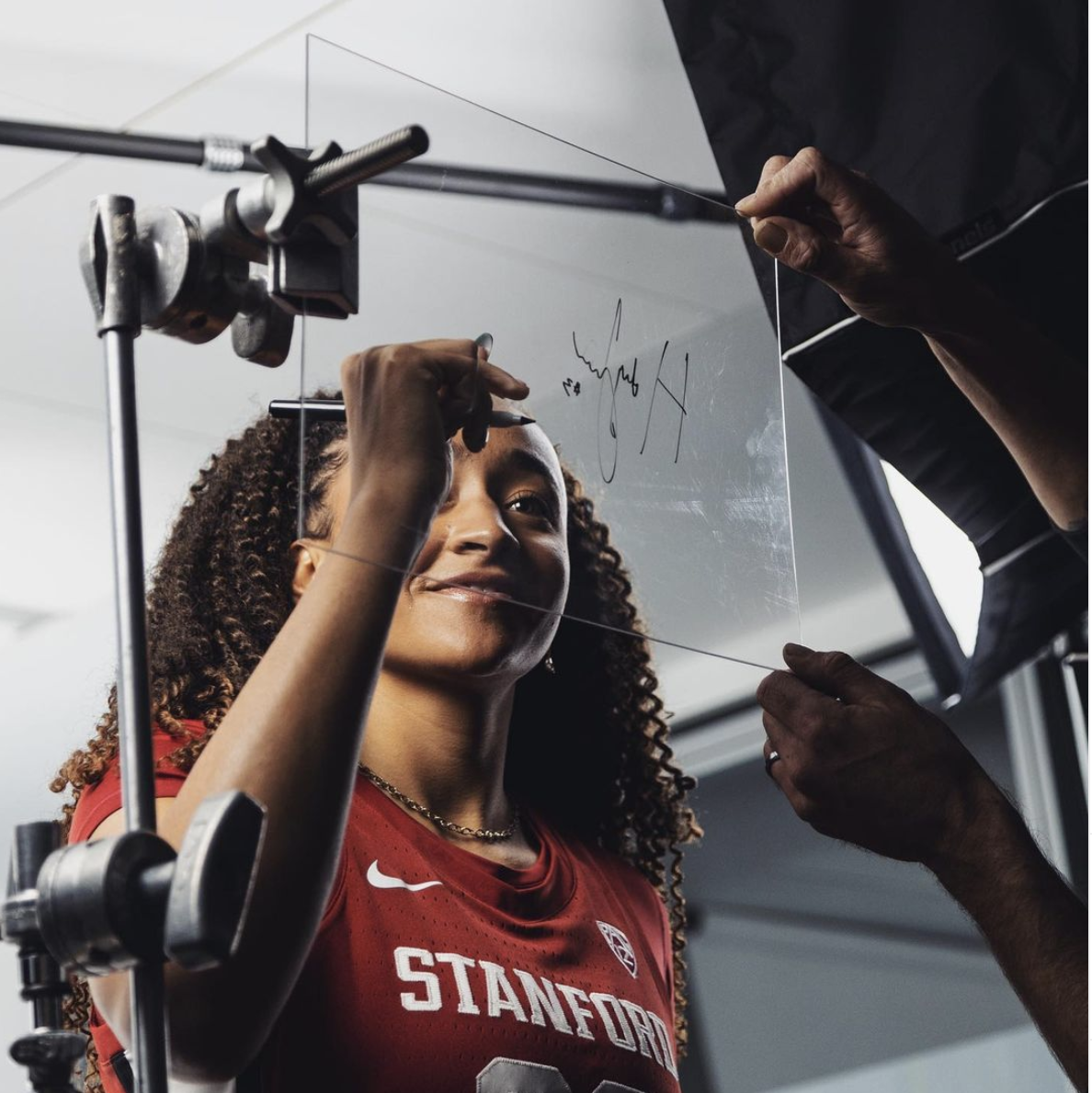 Haley Jones was born May 23, 2001, in Santa Cruz, CA. She was the No. 1 high school recruit in the class of 2019 and is currently a college basketball player for the Stanford Cardinal of the Pac-12 Conference, where they won the 2021 National Championship. She hit the deciding shots in both the semi-final and championship games to earn the NCAA Women’s Basketball Final Four Most Outstanding Player Award.

A natural-born athlete, Jones spent much of her childhood playing multiple sports: lifeguarding, gymnastics, swimming, soccer, volleyball, and track and field. Basketball might not have been the only sport Jones played growing up, but it quickly became her passion as the one she picked up the earliest in just the 3rd grade. Jones competed as a 3rd grader in a 5th-grade league. By 7th grade, Jones was playing for a varsity club team in San Francisco, which traveled the country for tournaments and showcases. She quickly earned the respect of her teammates and was not only playing but starting.

Jones went on to play four varsity seasons at Archbishop Mitty High School (Monarchs) in San Jose, CA. In the first three years of her prep career, Jones started 86 of 88 games and amassed 1,396 points, 718 rebounds, 278 assists, 148 steals, and 162 blocked shots. As a junior, Jones averaged 21.9 ppg, 10.0 rbg, 1.7 spg and 1.5 bpg in leading her team to a 29-1 record, championships, and MVP at both the Nike Tournament of Champions and West Coast Jamboree, and a No. 1 ranking in the USA Today Super 25. Jones was named a Naismith High School All-America honorable mention, All-Bay Area News Group Player of the Year, USA Today All-California first team, USA Today All-USA first team and Gatorade California Player of the Year.

As a senior, she averaged 26.1 ppg, 12.1 rpg, 4.4 apg, 2.7 spg and 2.8 bpg while leading the Monarchs to a 25-3 record and their fourth consecutive Central Coast Section title. After the season, Jones was named The San Francisco Chronicle Metro Player of the Year, Naismith National High School Player of the Year and Naismith High School All-America first team, WBCA National Player of the Year, California Female Athlete of the Year, Morgan Wooten Player of the Year, McDonald’s All-American, Jordan Brand All-American and Jordan Brand Classic MVP as well as Gatorade’s California Player of the Year for the second year in a row. Jones finished her career as the Monarchs’ all-time leading scorer (2,127 points), passing three-time Olympic gold medalist Kerri Walsh Jennings, while also setting the school’s career record for shooting percentage at 63. As the nation’s No. 1 recruit, Jones picked Stanford over Notre Dame, South Carolina, Oregon and UConn, becoming the first No. 1 prospect to sign with Stanford since Chiney Ogwumike in 2009 and the first female ever to announce her commitment on ESPN.

As a freshman at Stanford University during the 2019-20 season, Jones played in Stanford’s first 18 games, making 13 starts, helping lead the Cardinal to a 16-2 record during that time. Unfortunately, her season was cut short due to a season-ending knee injury. As a sophomore, and during one of the most challenging seasons in history where Jones and her team had to spend nine weeks on the road due to the pandemic and Covid restrictions in their home state of California, Jones helped guide Stanford to a 31-2 record, starting in all 32 games she played. The team captured the Pac-12 regular season title and the Pac-12 Tournament Championship en route to a NCAA Tournament Championship. As the Final Four’s Most Outstanding Player, Jones averaged 20.5 ppg, on 68% shooting from the field (19/28), and 6.0 rpg. A finalist for the 2020 Cheryl Miller award, Jones heads into the 2021-22 season as one of the nation’s best players.

Jones has also enjoyed successful runs with USA Basketball. In 2018, she was a member of the U17 World Cup team that captured gold with a perfect 7-0 record in Minsk, Belarus. She started all seven games and was named to the All-Star Five All-Tournament team. In 2019, she was selected as one of six USA Basketball participants for the 2019 NCAA Next Generation. Most recently, in June of 2021, Jones was named to the senior level Women’s AmeriCup Team, where they won Gold.

Jones is currently preparing for her junior season, and with her silent assassin mentality has drawn comparisons to a combination of Magic Johnson and Draymond Green. She is majoring in communications with a particular interest in sports broadcasting and journalism. She is currently interning for TOGETHXR, a brand co-founded by Alex Morgan, Chloe Kim, Simone Manuel and Sue Bird, which elevates women’s voices and tells their stories.

Jones is the daughter of Monique and Patrick Jones. Monique attended Metropolitan Sate University of Denver, and her father, Patrick, played basketball at Colorado College. Most recently, they served as the head coaches of Santa Cruz high school from 1996-2014. They currently lead the educational consulting firm, Fred Jones Tools for Teaching. Her older brother, Cameron, played for Palma High School and later collegiately at Pacific University in Oregon. Her cousin, DeLisha Milton-Jones, is a two-time Olympic and two-time FIBA World Cup gold medalist. Safe to say, basketball is in her blood. “She grew up in a gym, so to speak,” Patrick Jones said. “She’d come to practice, be around all the girls, always had a ball in her hand. That doesn’t mean she’s going to love basketball. Luckily, she did.”

Book An Experience With Haley Jones