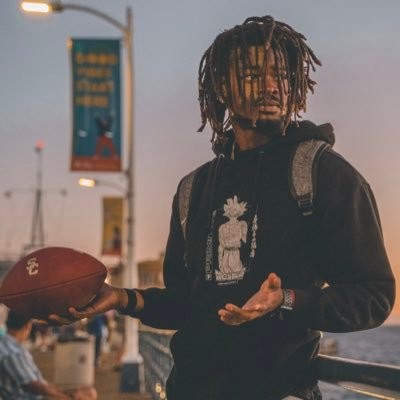 Isaac Taylor-Stuart is a redshirt junior cornerback for the University of Southern California. The San Diego native started three seasons at St. Augustine High School from 2014-2017 before transferring to Helix High School. Isaac was named to the 2017 USA Today All-USA First Team for his performances as a senior at defensive back, wide receiver and running back. Once billed as the nation’s fastest high school football player, Isaac was a 4-star recruit and the fourth-best cornerback in the country in the class of 2018 according to 247Sports. Isaac chose USC over Alabama and other top programs, and he started most of the 2019 season as a redshirt freshman.

Off the field, Isaac is a Vlogger and his “Kingathlete” YouTube channel has over 30K subscribers. Through content focused on football, fitness, video games and more, Isaac has a growing following on all forms of social media (IG: @kingathlete, Twitter: @Kingathlete5).

Book An Experience With Isaac Taylor-Stuart

Submit an inquiry if you are interested in partnering with me on an endeavor in Socia...