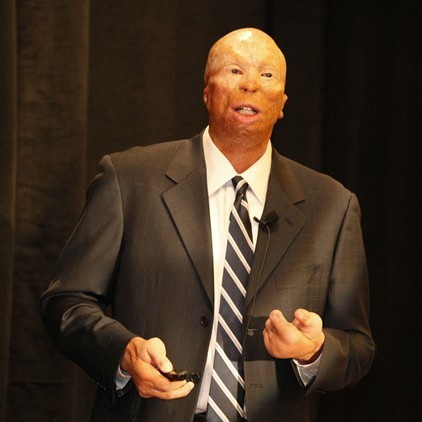 Jason Schechterle is a former Phoenix Police Officer and an Air Force Veteran. On the night of March 26th, 2001, a taxi cab crashed into the rear of Jason’s patrol car. Upon impact, Jason’s car burst into flames, trapping him inside. Through a series of miraculous and fateful circumstances, Jason survived the crash and ensuing physical and emotional catastrophe. He suffered severe burns to over 40% of his body, which drastically altered his appearance. He has undergone nearly 60 surgeries just to restore the ability to accomplish simple daily tasks we often take for granted.

Jason shares the story of his miraculous recovery and his drive to overcome everything from physical limitations to severe emotional hardships. From months in a coma to seemingly endless surgical procedures, Schechterle’s tale exemplifies the power of the human spirit and how we can find meaning even in our moments of greatest adversity – and how life and love can propel us forward when the next step seems beyond impossible. Jason's narrative chronicles his fight for life, his triumph over tragedy, and the inspiration that enables him to continue to overcome unimaginable adversity. He is a living testament that the power of the human spirit can never be underestimated or extinguished.

Jason remains happily married to Suzie, his wife of 25 years. He is an active
father to his three children and an avid golfer. In addition to speaking across the United States, Schechterle works locally as a spokesman for Serenity Hospice and Palliative Care.

Book An Experience With Jason Schechterle

"Jason has an motivating message of Hope and Encouragement which is highly inspirational. He has turned his personal adversity into an opportunity to help other people in life who may be dealing with difficult circumstances." - Jimmy Walker, businessman, philanthropist and founder of Celebrity Fight Night

"I wanted to take a moment to thank you for speaking at the Raytheon Missile Systems (RMS) leadership forum earlier this month. Your personal story truly embodies turning challenge into great opportunity. Your public speaking skills and your ability to connect with the audience are best in class. I continue to receive emails from RMS employees, who want to express their sincere gratitude for having had the opportunity to hear your story." - Dr. Taylor Lawrence, President, Raytheon Missile Systems

Our decision to bring Jason into our event was the best decision we could have made. Jason immediately connected with the audience of firefighters and police officers. Jason has a tremendous talent of sharing his extremely tragic story in a way that motivates others to look past their challenges and think positively. I would highly recommend Jason for any organization that is looking to reinforce the importance of positive attitude and how the actions each of us do impact people we don’t even know. Steve Koering Fire Chief |Emergency Management| City of St. Louis Park