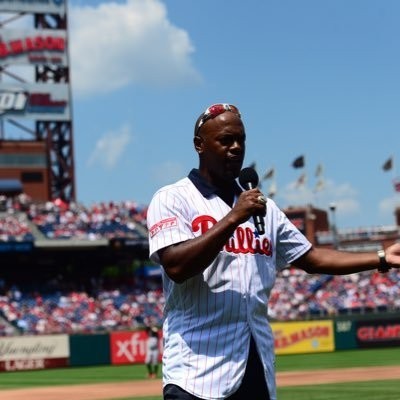 Jimmy Rollins is a former MLB shortstop who spent the majority of his career the Philadelphia Phillies. At the MLB level, it wasn’t long before Rollins earned recognition as an excellent defensive shortstop. In 2001, he became the Phillies' leadoff hitter, a role he retained for almost ten years. Rollins made three All-Star Game appearances in his career.

While with the Phillies, he compiled a 38-game hitting streak, which spanned the end of the 2005 season and the start of the 2006 season, the longest in team history. Rollins was named the National League (NL) Most Valuable Player (MVP) in 2007, as the Phillies won their division in the first of five consecutive seasons. He was also a key component of the 2008 World Series champion team that defeated the Tampa Bay Rays. In his career, Rollins led the NL four times in triples, and once each in runs, stolen bases, and stolen base percentage. As of 2018, he was the Phillies career leader in at bats (8,628), hits (2,306), doubles (479), and power-speed number (292.5), second in games played (2,090) and stolen bases (453), and third in runs scored (1,325), triples (111), and stolen base percentage (82.66). Rollins won the Gold Glove Award four times, as well as the Silver Slugger Award, and the Roberto Clemente Award (once each).

Book An Experience With Jimmy Rollins