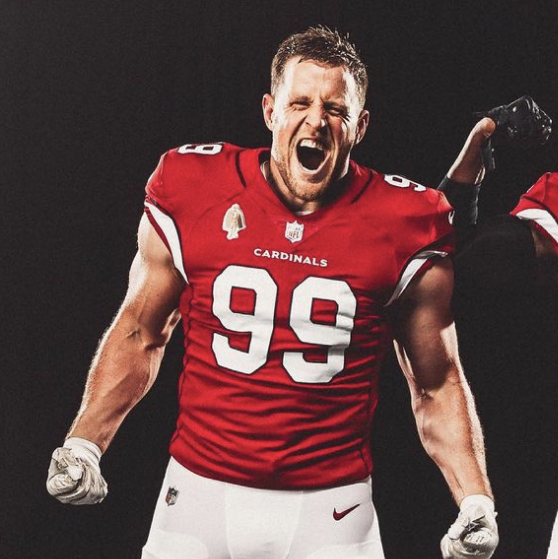 JJ Watt is a defensive end for the Arizona Cardinals and is widely regarded as one of the best defensive lineman of his generation. The Pewaukee, Wisconsin native was a standout tight end and defensive end at Pewaukee High School yet he was rated only a 2-star recruit. JJ committed to and attended Central Michigan University on a scholarship, but after his freshman season he decided to really bet on himself by transferring to the University of Wisconsin as a walk-on. JJ redshirted in 2008, was a contributor in 2009 and improved even more in 2010, when he was First-team All-Big Ten and First-team All-American. JJ’s remarkable ascent did not slow down after he was selected 11th overall by the Houston Texans in the 2011 NFL Draft. He was a 3x Defensive Player of the Year, 5x First-team All-Pro, 5x Pro Bowler, 2x NFL sacks leader and the Texans all-time leader in sacks and forced fumbles. He is the first player in NFL history to record two 20+ sack seasons in a career.

During that dominant decade in Houston, JJ became just as respected for his charitable work off the field. JJ’s foundation - the Justin J. Watt Foundation - provides after-school opportunities for children in various communities, in order for them to get involved in athletics in a safe environment. In 2014 JJ was nominated for the NFL’s Salute to Service Award, in recognition of his support for members of the military. Most notable among his community service efforts, JJ organized a crowdfunding campaign to help Houston recover from Hurricane Harvey in 2017. His campaign has raised more than $41.6 million, making it the largest crowdsourced fundraiser in world history. It was no surprise when JJ was named the 2017 Walter Payton Man of the Year.

JJ left the Texans and signed with the Cardinals in 2021, but on and off the field he remains a hero and a role model in Houston and beyond.

Book An Experience With JJ Watt

Book me to moderate or host your next panel, conference, or event...