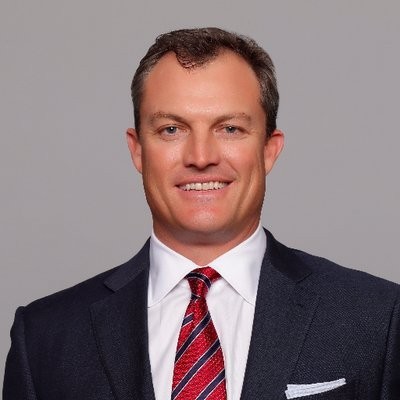 One of the most respected players to ever play football, and a six-time finalist for the Pro Football Hall of Fame, John Lynch is in his third season as the team's General Manager following a 15-year playing career and more than eight seasons as an NFL analyst.

Lynch was a star at both football and baseball at Stanford University. Lynch was drafted in the third round of the 1993 NFL Draft by the Tampa Bay Buccaneers. With Tampa Bay, Lynch was a two-time first-team All-Pro, two-time second-team All-Pro, Super Bowl XXXVII champion, and four-time Pro Bowler. Along with the Bucs, Lynch has also played with the New England Patriots and Denver Broncos. Lynch is in the Broncos’ Ring Of Fame and the Tampa Bay Buccaneers Ring of Honor. After his successful NFL career, Lynch was a commentator for Fox Sports from 2008-2017 before becoming the San Francisco 49ers.

Since coming to San Francisco, Lynch has been vigilant in seeking and acquiring the players that embody the team's culture on the field and in the community. While working hand-in-hand with head coach Kyle Shanahan and the coaching staff, Lynch and his personnel staff continue to add players through all available avenues.

Following the 2018 season, Lynch continued to improve the 49ers roster through trades, free agency, and the 2019 NFL Draft. The offseason started with the 49ers acquiring DL Dee Ford via trade and signing him to a five-year contract, followed by free agents such as LB Kwon Alexander, RB Tevin Coleman, and Pro Bowl CB Jason Verrett. The 49ers added eight players to the roster during the 2019 NFL Draft, including DL Nick Bosa with the second overall selection. On June 5, 2019, the organization announced at its annual State of the Franchise that it had signed All-Pro T Joe Staley to a two-year contract extension through the 2021 season, ensuring he would finish his career in red and gold. After the 2019 season, Lynch was the PFWA NFL Executive of the Year.

Book An Experience With John Lynch