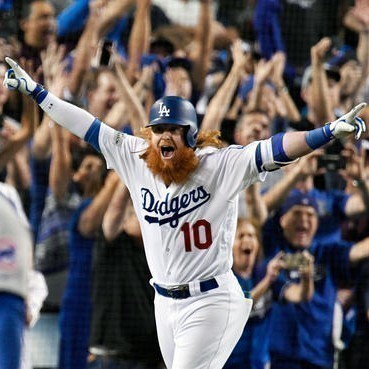 Justin Turner, veteran third baseman for the Los Angeles Dodgers, was selected in the seventh round of the 2006 Major League Baseball draft by the Cincinnati Reds, and made his major league debut in 2009. Justin has also had stints with the Baltimore Orioles and the New York Mets.

Justin is way more than an All-Star and NLCS MVP. Beyond his accolades as a player, he has made an enormous difference in the community. Justin and his wife Kourtney founded the Justin Turner Foundation, a 501(c)3 organization which benefits homeless veterans, children battling life-altering illnesses, and various youth baseball organizations. The Justin Turner Foundation hosts an annual charity golf tournament, is an official charity for the LA Marathon, and partners with the Dream Center, 17Strong, and Paralyzed Veterans of America. The Los Angeles City Council declared January 22, 2019 "Justin Turner Day" in honor of Turner's impact on the community.

Book An Experience With Justin Turner