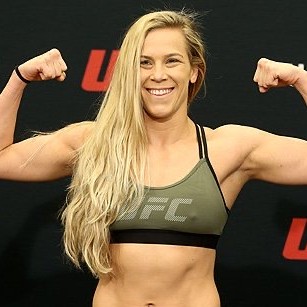 Katlyn Chookagian born December 28, 1988, is a North American mixed martial arts art by her livelihood. Being famous with the title Blonde Fighter, she now competes in feminine bantamweight championship at the Ultimate Fighting Championship. In any case, MMA and UFC, the mad fighter has strong understanding in wrestling, karate, Brazilian Jiu-Jitsu, Muay Thai and Boxing.

Born and raised in Quakertown, Pennsylvania, she began training karate from age four. Being educated in a few fighting sports, she left her amateur debut in MMA from the calendar year 2012. She turned into an expert fighter in the calendar year 2014. Acquiring the bachelor diploma in Management and Marketing from Fairleigh Dickinson University, she now trains together with other fierce fighters like Edson Barboza, Marlon Moraes along with also the staff captain, Frankie Edgar. She is currently in the top-10 in the UFC Women's Bantamweight rankings. She is  currently on a 4 fight win streak. She is American/Armenian and resides in Long Island, NY. Her hobbies include cooking and boating. Her next fight 10/22 in Abu Dhabi UAE; UFC 280

Book An Experience With Katlyn Chookagian