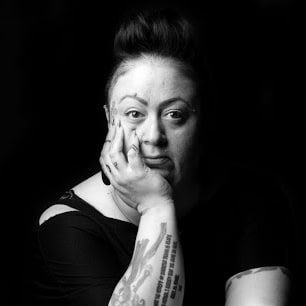 Mariangela Abeo (they/them) is a Mental Health Advocate, Speaker, Podcast Host, Producer and Photographer + Creator of the Faces of Fortitude movement. The movement began as a series of portraits that document the healing of those affected by suicide – providing a safe, stigma-free space both virtually and in person for mental health and suicide to be discussed. After losing their brother over a decade ago to suicide, and surviving their own severe attempt as a teen, Mariangela initially started this movement for their own healing. The portraits caught fire online and they quickly saw a need for a safe space for others to share their stories. They now travel the country to capture portraits of those affected by the epidemic in any way (be it loss, attempt or first responders) as a step towards their healing, and to educate people as both a mental health advocate + suicide loss and attempt survivor. In their spare time, M lives in the heart of the city in Seattle, Washington and is working on two books: a first edition fine art book, with poetry about depression and photographer’s notes, and also a memoir entitled The House of M.

Book An Experience With Mariangela Abeo