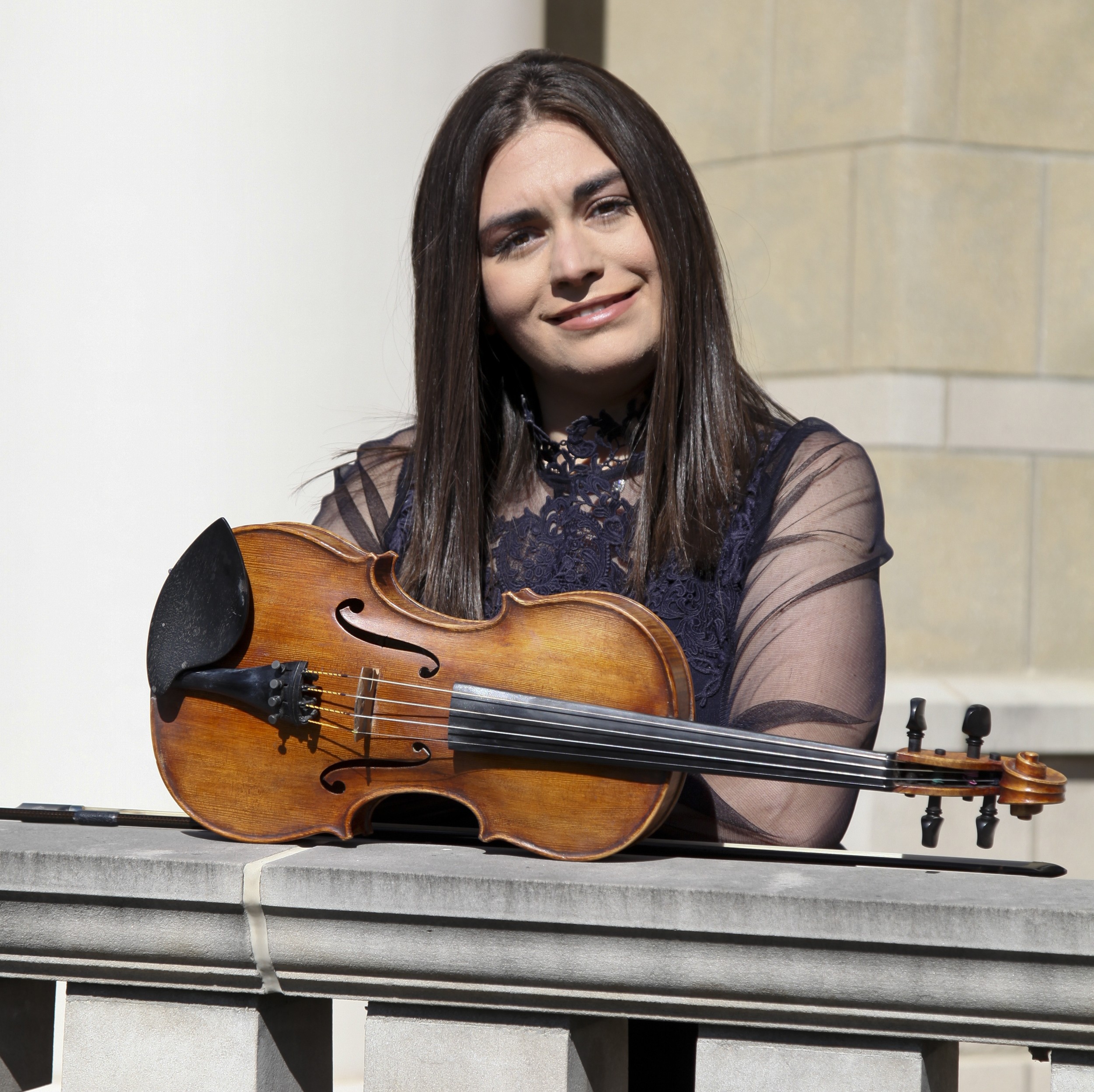 Mariela Shaker is an accomplished Syrian violinist and award-winning refugee advocate who survived the war in Syria and the University of Aleppo attack in January 2013. She fled to the US to study music at Monmouth College with a full-tuition scholarship. To be able to secure this opportunity, Mariela would hide away in internet cafes to apply to schools and programs throughout the world without electricity or water and under constant bomb and mortar attacks.

She graduated from The University of Aleppo in 2013, where she studied Business Administration. During her study at the university, she was the youngest violin teacher at the Arabic Institute of Music. Mariela risked death every day, commuting between her home and the Institute to create beauty through her violin and inspire children to pursue their dreams.

Aleppo was besieged in July 2013 at the same time that Mariela managed to leave Syria to go to her new school in America. Her only options were either facing ominous destiny in Aleppo or taking a very dangerous bus ride from Aleppo to Beirut on an unused sandy road. She chose the latter. The trip lasted for 17 hours. The driver got lost several times in the demolished buildings. She passed 50 checkpoints of soldiers whom many of them thought her violin case was a gun and demanded her an extra security inspection. A couple of days after her arrival in the US, some of her friends were killed trying to take the same route.

Being in the USA since 2013 and unable to return back home, Mariela was granted asylum (refugee status) in the United States, where she feels safe, but lives in constant fear for her family and friends who are surviving with the basic necessities of life in Aleppo, wondering if they will be alive tomorrow and if she will be reunited with them one day. More than another fascinating story of a refugee, Mariela stands for drive and determination. And it didn’t take long for this inspirational young woman together with her talent for music to make it to the flashlights and interest of the public and the politicians. Mariela was named a “Champion of Change” by President Barack Obama in 2015 and was appointed UNHCR High Profile Supporter in 2015. Since then, she received many awards such as the Anne Frank Honorary in 2018 and the Points of Light Award in 2017. She performed at prestigious venues such as The Kennedy Center, Lincoln Center, United Nations, Massachusetts Institute of Technology (MIT), and Harvard among many others. Mariela presented in Hong Kong, the Netherlands, the UK, Geneva, UAE, and all over the US.

Despite the challenges and hardship, Mariela endured as her family lost their jobs in the war and couldn’t support her financially, in only four years in the US she was able to receive two degrees; a bachelor's at Monmouth College and a Master's at DePaul University with full-tuition scholarships. She is a great example of a refugee who not only survives but thrives.

With her story of survival, like millions of other refugees, Mariela stands for the motivation and empowerment of young women. Especially Arabic women! With her music and her voice, Mariela is bringing awareness to young girls all over the world, showing them that everything is possible! Her courageous story has been profiled by the Huffington Post, Chicago Tribune, Washington Post, Buzz Feed, Women’s Day, and many others. Mariela is using her music to build bridges and promote peace and raise awareness for the plights of the Syrian people. What is remarkable about Mariela is that as a refugee, not only her music is heard, but her voice is for refugees in need! Though her own family has no electricity and many times she is unable to have contact, she perseveres for this noble cause.

Book An Experience With Mariela Shaker

I cannot thank you enough for your time and generosity on Monday night. The performance you gave was breathtaking and the stories you shared of your own experience as a refugee were an essential component to the evening’s success. Thank you for giving so generously of your time and talent.

Mariela, you brought us to tears with the beauty of your music and purpose. We are in awe and can’t thank you enough for such a beautiful, heartfelt performance at our Conference in Detroit. I hope you will let us know how we can be helpful in your journey and look forward to keeping in touch. You inspired so many. Thank you!

Your performance, as you’ve heard me say already, was just beautiful. Quite extraordinary. Mariela, you play every single note with your entire being. We can see you feel the music from head to toe. Amazing! Thank you so very much for gracing us with your gifts. It means so much to our team and to UNHCR as a whole to have you be part of what is a very momentous occasion for us. Thank you for always being so incredibly supportive.

I was touched by your willingness to discuss a difficult and emotional topic with eloquence and grace. By doing so, you helped demonstrate how important it is for the United States to accept and help Syrian refugees. The United States has only begun to benefit from the talents you brought to our country.

What a truly wonderful performance you gave at the Hands Up for Syria event on Monday 9 May. Everything about it was perfect: your excellent selection of pieces; your tremendous musicality; and your very well-chosen words. Every Syrian in the room was proud to be represented by you and every non-Syrian had in you a tremendous example of how cultured, educated, skilled, and charming the Syrian people are. Thank you so much for helping to make the evening such a success.