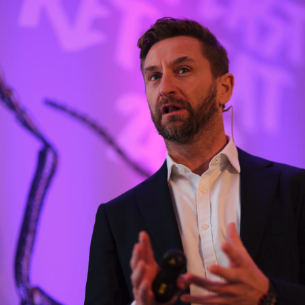 Matt Lindley is currently a commercial airline pilot, a former serving member of the UK Royal Air Force - having flown the UK Royal Family for over 10 years worldwide. Matt has two distinct keynote specialities.  Firstly he is a LGBTQ+ speaker, talking about his time and challenges in the Military as a gay pilot.  Secondly Matt is a leading expert in Human Perfoemnce Factors - drawing on experience from the flight deck to optimise outcomes, develop a speak up culture and flattern hierachies in organisations.

Matt graduated with a degree in commerce from the University of Birmingham. After leaving University, he joined the Ford Motor Company Graduate Training Programme and joined a team implementing Japanese Management techniques in the car industry. In 1995 Matt was selected to join the UK Royal Air Force as a pilot. During his military career, he flew many aircraft including the Hawk fighter jet. In 2000 he was selected to fly Her Majesty The Queen, members of the UK Royal Family and Government worldwide, serving on The Royal Squadron. Whilst serving, he became a qualified flying instructor and VIP qualified Captain. He flew missions in the Sierra Leone, Kosovo, Iraq and Afghanistan conflicts. Matt was one of the first openly gay pilots in the RAF once the law changed. In 2007 Matt left the Service to join a leading commercial airline, initially flying the Airbus on their short haul network. Matt now flies the Boeing 777 on long haul routes. In addition to flying, Matt specialises in non-technical training. He delivers Human Performance Factors keynote speeches and workshops which draw on flight management techniques to optimise outcomes, whilst minimising human error in the workplace. He specialises in healthcare and pharmaceutical sectors.

Book An Experience With Matt Lindley

“I cannot recommend Matt highly enough. He talked to the Close Brothers community about his journey and it resonated incredibly well with all colleagues, not just those from the LQBQT community. His candour and honesty really connected with people, and the ties with wider mental wellness and resilience were incredibly topical given the current pandemic. His humour shone through and it was one of the best received external speakers we have had to date. A thorough recommendation...”

“Matt’s ability to use his extensive experience in the airline industry, to clearly articulate lessons and solutions to the vitally important topic of patient safety, is refreshing and insightful. Human factors, attitude to risk and creating a just culture are key areas to focus and continually improve on, whatever the industry – but particularly relevant to pharmacy. A GREAT DAYS TRAINING.”