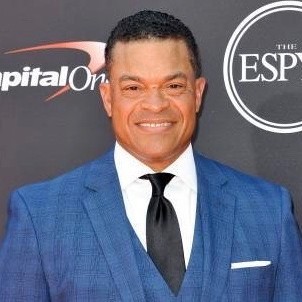 Michael Eaves is fast-becoming one of the most recognized faces — and emerging voices — in all of sports. With a Telly Award and five Emmys to his credit, Michael recently celebrated his 25th year in journalism and sports broadcasting, having covered some of the most-watched athletic events of the 21st century.

Following more than two decades of journalism experience in television and radio, Michael had the privilege of joining ESPN in May 2015 as a studio anchor. In addition to his in-studio SportsCenter duties, he’s provided live coverage from the Summer and Winter Olympic Games, The Masters, NBA Playoffs, Monday Night Football, NFL Owners’ Meetings, the Rose Bowl, and Muhammad Ali’s funeral.

The pride of White Plains, Kentucky, Michael’s smooth delivery and colorful commentary stem from his love for learning. “I’ve always been interested in what’s going on around me, both in and out of the sports world — and what happened before me. Historical perspective is invaluable when it comes to storytelling.”

Michael hosted Clippers Live and Angels Live for FOX Sports West and Prime Ticket in Los Angeles and served as sideline reporter for the networks’ Lakers’ and Dodgers’ packages. He also served as one of the primary hosts for In My Own Words and Before The Bigs, two original programming series on the regional sports networks.

Michael’s style is natural and upbeat, his reports are tight and commanding, and his dialogue and interaction with guests is intriguing and informative. “My delivery is a result of my homework. I’ve always felt the more you know, the better you’ll perform as an anchor/reporter,” Michael says. “Knowledge is power, but it’s also comforting. I’ve never been uncomfortable on-camera, because I go to the studio with the confidence that I know exactly what I’m talking about. I also try to write as much of my own copy as possible, which makes it easier to deliver in a comfortable, authoritative fashion.”

Some of the “coolest” and most coveted events Michael has covered include:

Michael appeared on FSN’s national Pac-12 football coverage as a studio host and sideline reporter, as well as serving as studio host for the Pac-12 Men’s Basketball Tournament. He was also a frequent contributor and guest host on KLAA-AM 830.

Michael has an in-depth understanding not only of the sports he covers, but of the athletes who compete. In Kentucky, he grew up playing basketball, baseball, football, and golf. Once in high school, he focused on basketball and golf. He was a Kentucky all-region basketball player and was the first black golfer to qualify for the Kentucky High School State Golf Championship in 1990. He briefly walked on the golf team at the University of Kentucky, where he received a full-ride academic scholarship, but ultimately decided to concentrate on academics.

“I have strong convictions when it comes to honesty and integrity,” Michael says. “Too often in sports, those ideals get pushed out of the way for the pursuit of money. And while sports is a business, the game itself is based on integrity through sportsmanship. Everyone needs to be reminded of that sometimes.”

While in college at the University of Kentucky, Michael landed his first job in television. He graduated with a Bachelor of Arts degree in journalism and spent seven years with WKYT/WDKY-TV in Lexington as a sports anchor, reporter, and producer.

In 2003, Michael joined FOX Sports West and PRIME TICKET from WPTY/WLMT-TV in Memphis, where he worked as a sports anchor for four years. In Memphis, he was the sideline reporter on the Grizzlies’ cable telecasts. He also hosted a morning sports talk show on Sports 56 WHBQ.

Michael won five LA-Area Emmy awards with FOX Sports West in the Best Sports Reporting and Outstanding Sports Feature categories. He also won a 2012 Telly Award for Best Sports Feature and was named the Best Television Anchor in Southern California by the LA Press Club in 2013. His affiliations include memberships in the National Sportscasters and Sportswriters Association and the National Association of Black Journalists.

The adopted son of a coal miner and a social worker, Michael has lived in Lexington, Memphis, Los Angeles, New York, and now in Hartford, Connecticut, with his wife of nine years, Crystal. When he isn’t working, Michael can usually be found on the golf course, at the gym, traveling, reading, or consuming information on one of many devices.

Book An Experience With Michael Eaves

Book Michael to MC your next event or moderate a panel discussion!

Book A Livestream with Michael Eaves