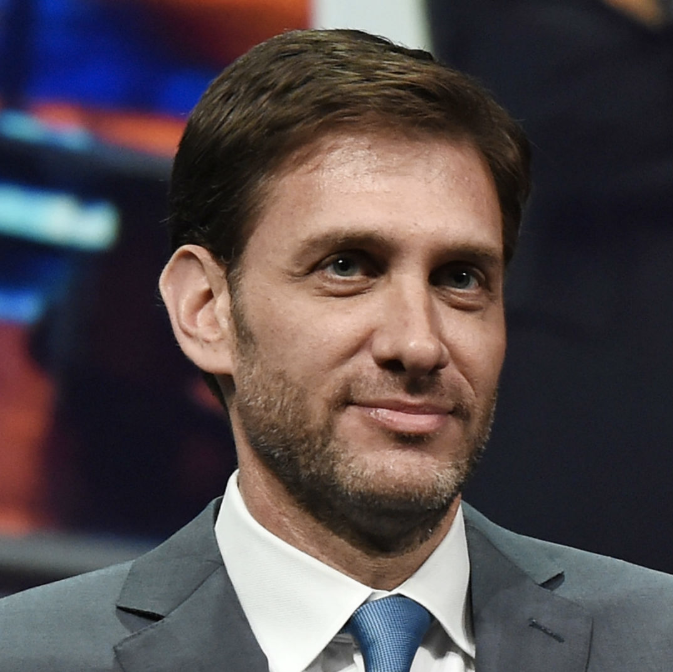 For 15 years, sports fans have been waking up with Mike Greenberg – half of ESPN Radio’s weekday morning Mike & Mike, the perfect sports fan complement to his ex-jock co-host former NFLer Mike Golic. The show (6 – 10 a.m. ET), simulcast on ESPN2 since 2005, is available on ESPN Radio, ESPNradio.com, ESPN Radio app, SiriusXM and ESPN affiliates across the country. “Greeny,” joined ESPN in September 1996 as an anchor for the November launch of ESPNEWS. He later anchored SportsCenter for many years, even long after assuming the daily radio duties in December 1999. Greenberg and Golic have parlayed their winning formula to team on a variety of events:

• Announced and played in Legends Game at Yankees Stadium in 2008 and St. Louis in 2009

• Appeared as “guest conductors” at Wrigley Field, leading Cubs fans in singing “Take Me Out to the Ball Game” multiple times • Served as guest emcee at White House Tee Ball game on the South Lawn and attended official White House dinner in July 2008

The duo have also appeared on other ESPN shows and outlets: the weekly Mike & Mike’s Best of the NFL on ESPN, a primetime special on ESPN, Mike & Mike at Night; hosting a summer prime-time bowling series featuring pro athletes (League Night); and online as star characters in ESPN.com’s Sports Emmy Award-winning “Off Mikes” animated comedy series. It is through the morning radio show, however, that Greenberg has become best known. The program was first seen on ESPNEWS in 2004 and on ESPN2 since January 2005. In 2007, Greenberg’s first book, Why My Wife Thinks I’m an Idiot, spent five weeks on the New York Times bestsellers list and was nominated for a Quill Award. It was the humorous self-deprecating account of his life as sports fan and husband. In April 2010, Greenberg, along with Golic, released Mike & Mike’s Rules for Sports and Life, which reached #3 on the New York Times bestsellers list. In April 2013, Greenberg debuted his first novel, All You Could Ask For. The novel, which was listed on the New York Times bestsellers list, is written from the perspectives of three women, strangers confronted with cancer diagnoses, who find each other while confronting their own battles with the disease. 100% of the proceeds from the novel will be donated to the V Foundation for Cancer Research. In January 2015, Greenberg’s second novel, My Father’s Wives, hit stores. Prior to joining ESPN Greenberg had worked as a sports anchor/reporter for the regional cable news network CLTV in Chicago since April 1995. In addition, Greenberg had worked for Chicago’s WSCR-Radio (1992-96) serving as a reporter covering events including the World Series and Super Bowl and talk show host. From 1994-95, Greenberg worked as a reporter for SportsChannel Chicago. He also worked as a syndicated sports columnist for the California-based Copley News Service, writing a weekly column (1993-95). Previously Greenberg worked for Chicago’s WMAQ-Radio as sports anchor/reporter from 1989-92.

Book An Experience With Mike Greenberg

Submit an inquiry if you are interested in partnering with Mike o...

Let's play 9 or 18 holes at a course of your choosing!