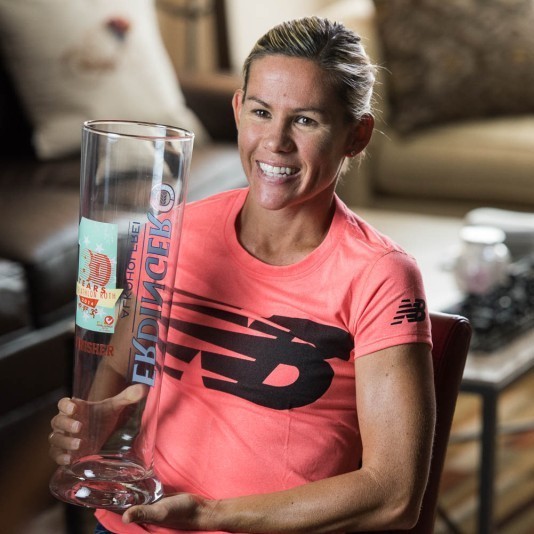 Mirinda Carfrae is an Australian professional triathlete and an Ironman Triathlon world champion. Carfrae has achieved podium positions in six of her seven attempts at the Ironman World Championships: 1st-place finishes (2010, 2013, 2014), three 2nd-place finishes (2009, 2011, 2016) and a 3rd place. She also won the 2007 Ironman 70.3 World Championship. She has set a new course record for Marathon running 5 times throughout her career, including 2013 where only 2 men recorded a faster time. 2014 has been a year filled with exciting new adventures for Rinny thus far. Her winter wedding (December 2013) to fellow triathlete and Ironman Champion Timothy O’Donnell marked the start of a thrilling new chapter in her personal life. Professionally, the reigning Ironman World Champion expanded her horizons to Europe, claiming victory against a highly competitive field at Germany’s iconic iron-distance race, Challenge Roth, and confirming that all eyes will be on her yet again in Kona. When not traveling the world in pursuit of triathlon’s greatest challenges, Rinny and Tim make their home in the endurance sports haven of Boulder, Colorado, along with their stuffed dog Charlie.