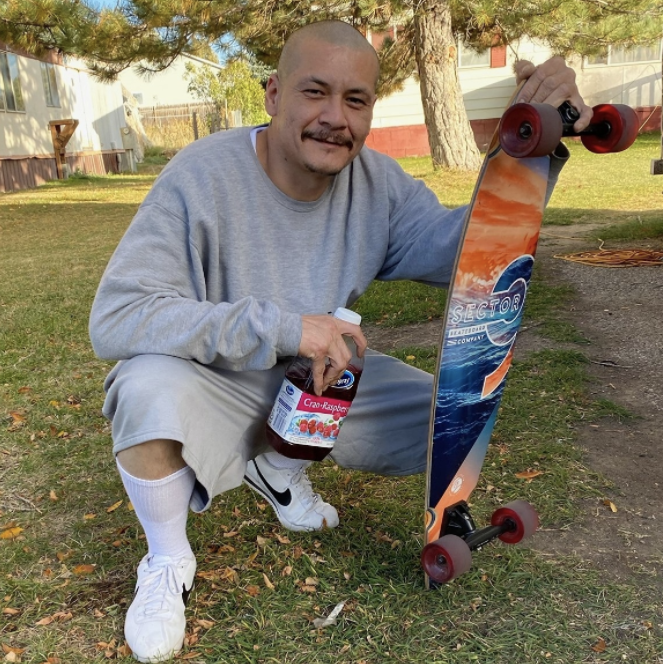 Nathan Apodaca aka DoggFace is the 38 year old TikTok sensation from Idaho Falls, Idaho. In September 2020 Nathan posted a TikTok video of him skateboarding, listening to Fleetwood Mac, 'Dreams' and drinking Ocean Spray Cranberry Juice that went viral around the world. As a result of Nathan's TikTok video going viral, Fleetwood Mac, "Dreams" 1977 song was back on the music charts at #1 and the "Rumors" album at #7, garnering Nathan worldwide attention.

Prior to Nathan's international fame, he was working in a potato warehouse in Idaho and living in a trailer with no running water or electricity. His car was broken down so he skateboarded to work and created the video that the world fell in love with. Fans showered him with over $15,000 in donations and it changed Nathan's life who takes care of his 2 teenage daughters. Nathan was gifted a 2020 Nissan Frontier from Ocean Spray for all the publicity they received and sold out of Ocean Spray Cran-Raspberry everywhere. Nathan also got married to his longtime girlfriend Estela Chavez and paid $320,000 cash for his first home.

Since Nathan’s international fame, he has made over a million dollars working for every music label in the industry promoting new music, NFL Super Bowl, Nathan led the Presidential Inauguration on his skateboard and his celebrity was born. Nathan is currently a character on Reservation Dogs one FX for Season 2 and he has released his first single and music video, “LOWRIDER” by Klypso, Doggface, Snoop Dogg and WAR. Nathan has kept close to his roots and believes in giving back and helping those in need. Nathan has donated to various Animal Organizations, his local Church who was struggling during Covid, the homeless in Los Angeles and his hometown of Idaho Falls. He never stops giving back to his fans with randomly placing gift bags of his merchandise with cash and taking photos of the location and placing on social media for fans to find. Giving cash away on social media during the Holidays. Doggface is literally the epitome of the American dream and how you should never give up yourself and your dreams.