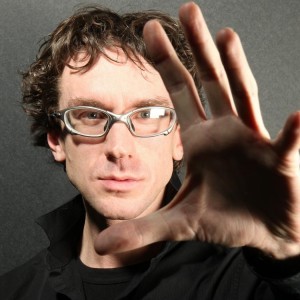 Pablos' is one of the hottest speakers in the world. He is an inspiring technology futurist, an inventor with 70 patents, an innovator, and one of the most renowned hackers in the world with a unique view into problem-solving, and breaking/building new technologies - talents that he has used for more than a decade at a lab in Seattle, where, he lead 150 scientists and engineers in creating the solutions to world-level problems.

Pablos’ TED talks are going VIRAL online, totaling 30+ Million views (his first TEDx talk, from 2012, has over 20 Million views) Pablos has led a wide variety of futuristic invention projects to solve world-sized problems, including a fission reactor powered by nuclear waste and a device that shoots mosquitoes out of the sky with lasers to help eradicate malaria – part of a mission with over $100M in funding from Bill Gates. He also was one of the original minds building spaceships at Blue Origin with Jeff Bezos, and he created the first 3D printer to ever print food, as well as helped to create the #1 selling 3D printer in the world, the Makerbot. In 2019, he appeared as a featured expert throughout the critically acclaimed documentary, “Machine”. Currently, Pablos is the host of the Deep Future podcast and is leading Deep Future investments in startups that are implementing science fiction to solve the biggest problems in the world.

His speech is extremely compelling and inspiring, and you will hear some audience members say he was the best speaker they have ever seen talk about technology and the future! He is a futurist who is creating the future! He wants to inspire people to create solutions, invent, and problem-solve – by looking at the world through the eyes of a hacker. Pablos has his popular podcast called Deep Future where he interviews the smartest people he knows.

He has spoken at the biggest events in the world including The United Nations, Davos World Economic Forum, and Google’s Zeitgeist. Pablos was invited by Bill Gates to speak at the Microsoft CEO Summit. After Pablos’ speech, Warren Buffett decided to sit next to Pablos at lunch… Pablos wrote about it in a post online here: "Warren Buffett sat down next to me for lunch at the Microsoft CEO Summit last week. We sent back the fancy food and got burgers, cookies and milk instead. We had so much fun that we skipped the next session and hung out for another hour. Everything you've heard about Warren is true - he's a delightful person that makes you believe it must be possible to be successful without becoming a jerk."

Pablos was the closing speaker for FORTUNE’s 2019 CEO Initiative event in NYC. Pablos is invited by Jeff Bezos to go to his MARS conference, an invite-only event where less than 200 of the top minds on the planet converge to talk about robotics, AI, and going to Mars.

Book An Experience With Pablos Holman

“Just wanted to let you know that we just finished with Pablos’ talk and it was one of the best, if not the best, talk we’ve had in all of our editions so far. His talk was inspiring, full of good insights and he was funny and serious all together. The Q&A went great as well, really good overall.”

“Briefly wanted to reach out and say thank you to Pablos for a tremendous Masterclass yesterday, it was fantastic welcoming him. It was a great Masterclass and have received tons of positive feedback, so I very much hope we can get to do it again in the future.”

Suzanne O'brien, U of Tulsa

“To let you know the evening with Pablos was a big success! His presentation at the cyber-conference was also.I think we had a crowd of around 1300 people at his evening talk, those at the dinner found him so warm and accessible as his companion….my feedback from audience attendees was ” one of the most enlightening talks ever in city”.He also stayed afterward to talk to students and audience members, which was wonderful of him. So again big hit and loved his advice on not watching daily news! Thank you for working with me on bringing him to Tulsa. Enjoyed putting together this event with you.”

“Thank you for making time in your busy schedule to speak at the 2019 WSADA Convention in Kauai. You met and exceeded every expectation and most certainly held the audience’s attention. Your presentation on up-and-coming technology and they small, impactful ways we can affect those globally for a better tomorrow left us wanting even more.”

“Well, Pablos absolutely killed it last Thursday here in Bend! I mean he was already my favorite speaker for getting in the car and driving north in a snow storm when the SFO flights continued to cancel and delay. What a frickin rock star!! And then he brought it. Everyone was so interested, there were a ton of questions during Q&A, and the audience was intently listening throughout his presentation. I am hearing “best luncheon event ever” by many critical folks so YAY and I’m so incredibly grateful.”