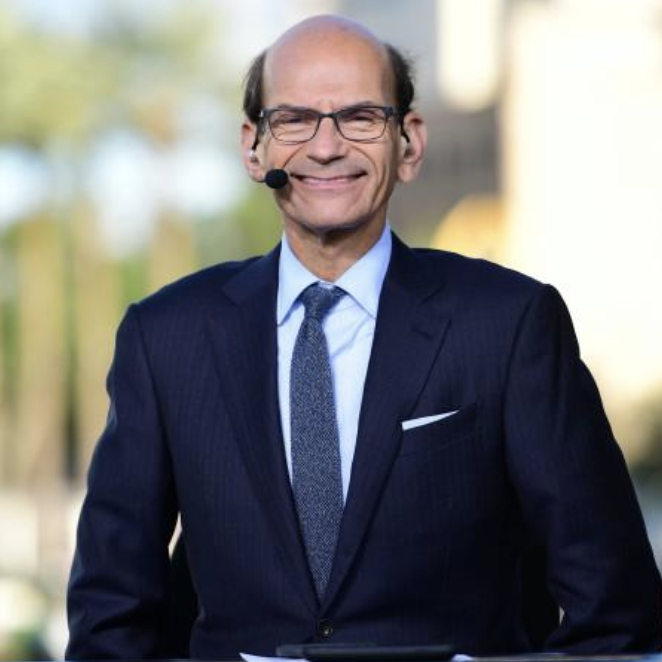 Paul Finebaum — a longtime sports talk radio host known by many as the leading sports authority in the South and the “Voice of the SEC’’ — joined ESPN in August 2013 as host of the The Paul Finebaum Show. The four-hour daily program, heard on ESPN Radio Monday – Friday from 3 – 7 p.m. ET and simulcast on SEC Network, showcases Finebaum’s compelling opinions and deep knowledge of the SEC as well as his interactions with his passionate callers, many of whom have followed him for years. On August 16, 2017, Finebaum will debut a TV-only hour of his show on ESPN2 at 2 p.m. ET. In addition to hosting The Paul Finebaum Show, he serves as a weekly analyst on SEC Nation, the traveling pregame show for SEC Network. And he appears on a variety of other ESPN shows and outlets, including SportsCenter, College Football Live, College GameDay and in ESPN The Magazine. Prior to joining ESPN, Finebaum served as host of the Paul Finebaum Radio Network (2001- 2012). Finebaum arrived in Birmingham in 1980 and became an award-winning columnist and investigative reporter for the Birmingham Post-Herald and later the Mobile Press-Register. From 2011 – 2012, Finebaum wrote a college football column for SI.com. Finebaum has received many honors for his work. In March 2013, Sports Illustrated ranked him one of the 20 Most Powerful People in Sports Media nationally (#17). Mike Greenberg and Mike Golic of ESPN (at No. 14) were the only other radio hosts mentioned on the list. In 2004, Sports Illustrated named the show as one of the top 12 sports radio shows in the United States. In January 2012, The Bleacher Report named Finebaum one of the “25 Most Influential People” in college football. Bunn Sports, a regional website, listed Finebaum as “the No. 1 must-follow in college football’’ on twitter. In July 2009, The Orlando Sentinel named Finebaum one of the SEC’s “10 most powerful people.” In 2002, Finebaum was named by The Tennessean in Nashville as one of the “Southeastern Conference’s Top Power Brokers,” coming in at No. 4. In 2008, Columbia University named Finebaum’s show a winner of its annual ‘Let’s Do it Better! Workshop on Journalism, Race and Ethnicity. Finebaum was selected for “providing a strong and sometimes controversial view on racial issues in sports through his multi-media contributions” In particular, Columbia cited a poignant show on the Martin Luther King Jr. holiday – which highlighted the slain Civil Rights leader’s still strong connections with today’s sports stars.

Book An Experience With Paul Finebaum

Submit an inquiry if you are interested in partnering with Paul o...