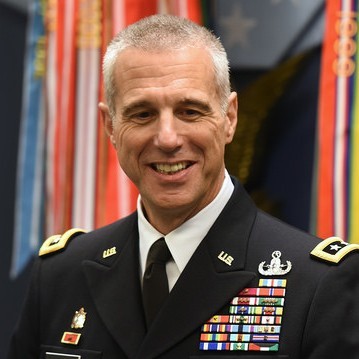 Reynold Hoover is a former Lieutenant General, who retired as the Deputy Commander of U.S. Northern Command. As a civilian, He is the Principal of RNHoover Consulting LLC assisting clients on national and homeland security matters. He also serves on the President’s National Infrastructure Advisory Council, is a Senior Mentor for the US Army War College and is a Senior Fellow at the McCrary Institute, Auburn University. Finally, General Hoover is an engaging, sought-after keynote speaker on leadership, security, crisis planning, and more!

While at NORTHCOM, General Hoover helped lead the command in preparing for and responding to threats against North America and providing defense support to civil authorities.

Over his 35 years in the military, General Hoover has commanded at every level up to, and including, a two-star theater level command. Some of his staff assignments include: Mobilization Assistant to the Director of the Defense Intelligence Agency and as the Director of Intelligence and Chief Information Officer at the National Guard Bureau. In 2009-10 General Hoover was responsible for theater-wide logistics as the Commander of the Joint Sustainment Command – Afghanistan.

Complementing his military service, General Hoover also has had a distinguished civilian career of over 30 years serving as Chief of Staff for the Federal Emergency Management Agency, and later as Special Assistant for Homeland Security to President George W. Bush on the Homeland Security Council. In 2018 he retired from the Central Intelligence Agency where he served as a Senior Intelligence Service Officer.

General Hoover's unique experience has taught him tons about leadership, crisis planning, security and more. As a keynote speaker, General Hoover now shares this knowledge with corporate audiences, local organization, and schools/universities alike. General Hoover capitvates a crowd with his energy and enthusiam and speaks on a range of topics including:

General Hoover holds several military awards and decorations, including the Defense Distinguished Service Medal and the Master Explosive Ordnance Disposal Badge.  He is a member of The Florida Bar, the District of Columbia Bar, and the Council on Foreign Relations.  General Hoover also serves on the board of The Old Soldiers Home Foundation and is an honorary board member of the EOD Warrior Foundation. His interests include mountaineering, scuba diving, flying and reading. He resides in Maryland with his wife Kathy and her two children.

Your session was the most liked session of the entire week! People were really excited by your comments, took on your challenge to make connections, and are taking away your message of communications and responsibility back to their respective offices and beginning the conversations for updated planning.

A TERRIFIC keynote! I loved the historical context and your specific calls to action for the community and for each individual.

Engrossing and important message from the General. Awesome presentation!

Please fill out the form to request more information about Reynold N. Hoover