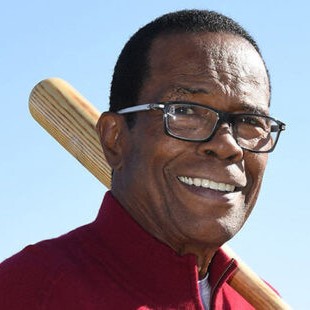 Rod Carew is a Baseball Hall of Famer who played first and second base, and is considered one of the best pure hitters in the history of the game. He played for the Minnesota Twins, winning the 1967 AL Rookie of the Year, and the California Angels. He also won the 1977 AL Most Valuable Player Award, setting a Twins record with a .388 batting average. Carew also started in 18 straight All-Star Games and won seven AL batting titles, the second most AL batting titles in history behind Ty Cobb. Carew became the 16th member of the 3,000 hit club and his 3,053 hits are 27th all time, with his career batting average of .328 being 34th all time. He was elected to the National Baseball Hall of Fame in 1991 in his first year of eligibility, and he appeared on upwards of 90 percent of the ballots. He was also elected to the Caribbean Baseball Hall of Fame, Minnesota Twins Hall of Fame, and Angels Hall of Fame. In 2016, the AL batting title was renamed to the Rod Carew American League batting title.

In addition to his on-field accomplishments, Rod Carew is a devoted philanthropist who has dedicated his time off the field to helping end childhood cancer with organizations like Pediatric Cancer Research Foundation, Leukemia & Lymphoma Society, and the City of Hope. He is also the survivor of a massive heart attack that required a heart transplant. While recovering from the heart attack, he dedicated himself to raising awareness about heart disease in partnership with the American Heart Association.

He is also the author of multiple books on hitting and his life. The latest, “One Tough Out” features the obstacles he overcame in life as an abused child in Panama who moved to New York to escape from his alcoholic father, to a high school kid dreaming of playing in the big leagues, despite not making his high school baseball team. Finally, it tells the incredible story of the heart donor who saved Rod’s life turning out to be a kid who went to school with Rod’s children and who Rod inspired to be a pro athlete himself before his untimely passing.

Book An Experience With Rod Carew