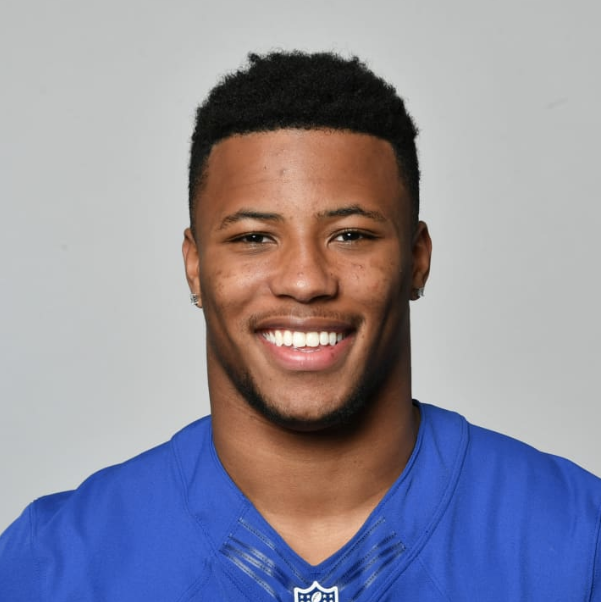 Saquon Barkley is a running back for the New York Giants of the National Football League. Saquon is widely regarded as one of the most exciting and explosive stars in the NFL. He was born in New York and later moved to Pennsylvania, where he attended Whitehall High School. Saquon was a track and field star and a 4-star football recruit in the class of 2015. He initially committed to Rutgers University before deciding to take his talents to Penn State instead. Saquon spent three seasons in Happy Valley, and in his last two (2016-17) he was back-to-back Big Ten Offensive Player of the Year and First-team All-Big Ten. In those three incredibly memorable years as a Nittany Lion, Saquon racked up 5,557 all-purpose yards - including 3,843 yards on the ground with 43 rushing touchdowns - and set numerous Penn State records such as most rushing touchdowns in a career, most rushing yards by a freshman and sophomore as well as most total yards in a single game. After his junior year Saquon finished 4th in Heisman Trophy voting and was also a finalist for the Doak and Maxwell awards, given to the nation’s best running back and best overall player, respectively. Saquon propelled the historic Penn State program back to national prominence, so it was no surprise when he was selected 2nd overall by the New York Giants in the 2018 NFL Draft. And it was no surprise when Saquon picked up in the NFL where he left off in college, rushing for 1307 rushing yards with 15 total touchdowns for the Giants in 2018 which earned him Rookie of the Year and Pro Bowl recognition.

During his rookie season Barkley was also a member of the NFL’s “My Cause, My Cleats” charity. He used this platform to raise money and awareness for 22Q, a rare genetic disease that Barkley’s niece was diagnosed with when she was 5.

Book An Experience With Saquon Barkley

Submit an inquiry if you are interested in partnering with Saquon...