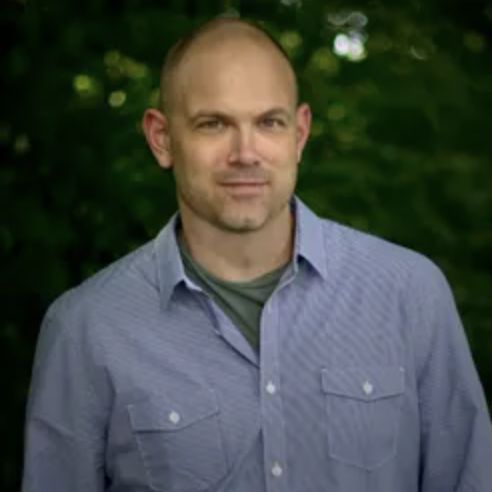 After graduation from Vanderbilt University, Silouan Green accepted a commission in the United States Marine Corps. While serving in the Marines, he was involved in a tragic jet training accident. In the ejection, Silouan's back was broken and his co-pilot tragically killed.

This horrible event and the complications that followed left Silouan a shell of a man and he descended into the nightmare of Post Traumatic Stress Disorder, PTSD. His life in pieces, he was eventually disability discharged and then hit the road on the back of a motorcycle for two years to look for a new beginning.

Since that journey began, Silouan has published an internationally distributed outdoors magazine, Bearfoot Magazine- Journal of Northern California Outdoors, founded a successful advertising and marketing business, but more importantly, has developed The Ladder UPP life skills program. The Ladder UPP has been used by thousands who have suffered trauma and severe life setbacks to make their life more fulfilling and resilient. It has also been utilized by the loved ones, friends, colleagues and teachers of those suffering from depression and mental trauma in order to better engage and respond to them. Silouan is also an instructor and lecturer on PTSD for the Public Agency Training Council, the largest public training safety agency in the United States, it is his honor to instruct first responders around the country.

Recently, Silouan and his family were featured in a documentary produced by two of the country’s leading mental health advocates, David Covington and Dr. Thomas Joiner.

Book An Experience With Silouan Green

Silouan Green’s message impacted everyone in attendance and it is exactly the kind of message all our veterans need to hear, especially those who are dealing with PTSD and other types of trauma. His story relative to his personal experiences and his own personal journey are relevant across the spectrum of today’s military, the veteran community and society as a whole.

Silouan was a great partner to work with! He definitely exceeded our expectations! PTSD is a sensitive and very misunderstood subject so it was nice to be able to bring in an expert who could shine a positive light on the issue as well as motivate the audience towards engaging with those in the community who may be currently suffering. I would highly recommend Silouan Green to anyone looking for a knowledgeable and encouraging speaker!

I have been doing April conferences for many years now, and never have I had so much positive feedback regarding a speaker. I can say that you far exceeded any expectation I may have had.

Silouan’s training is invaluable, life changing and has far exceeded our expectations. I believe it has saved the lives of the many officers who have been in attendance.

Silouan Green’s journey of overcoming incredible personal trauma to find passion and purpose in life is both inspirational and timely. I look forward to helping spread the word and reach those who need to hear his message.

The future of Silouan Green’s The Ladder UPP is easy to see- it needs to be provided as part of a treatment program for any service member who is suffering from stress, anxiety, anger and/or depression due to trauma. It doesn’t have to be in a group- it can be individually, with or without a clinician, and it can even be sent as a care package to anyone willing to give it a try.