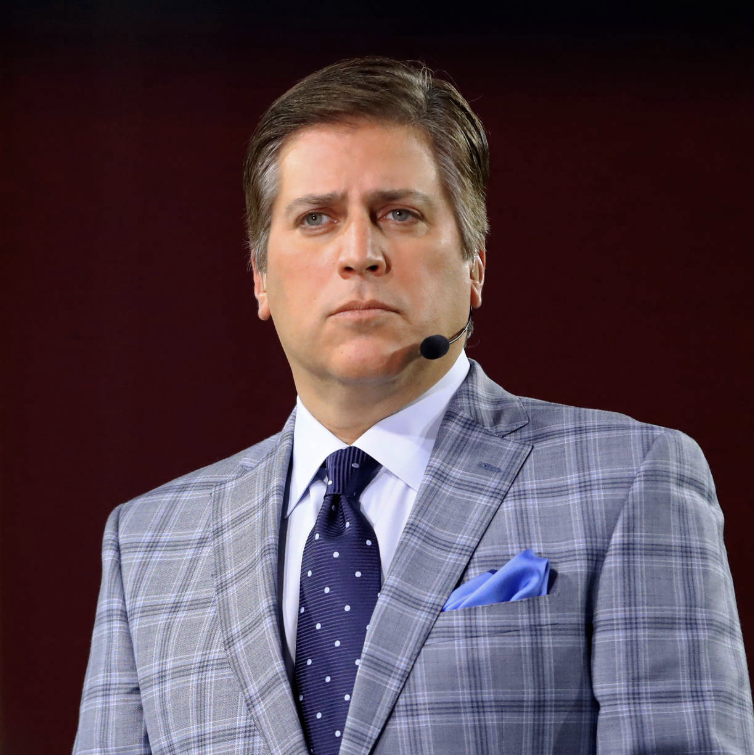 Steve Levy is one of ESPN’s signature voices, having joined the company nearly three decades ago in August 1993. Widely known for anchoring SportsCenter throughout his career, Levy has also emerged as one of the company’s leading play-by-play commentators for his work on college football, XFL and the NFL. Levy has called weekly ESPN and ABC college football games since 2016, working with analysts Brian Griese and Todd McShay. His first game in 2016 was the historic LSU-Wisconsin game at Lambeau Field. Other memorable games include a variety of major rivalries – Notre Dame-USC, “Bedlam” in Oklahoma, USC-UCLA; major upsets – Clemson’s 2016 home loss to Pittsburgh and Iowa’s shocking 2017 defeat of Ohio State; and thrilling finishes like UCF’s overtime victory in the 2017 AAC Championship to cap the program’s perfect season. Levy also calls the College Football national semifinal annually for ESPN Radio, and he’s contributed to the Field Pass presentation on ESPN2 of the National Championship game “MegaCast.” In 2019, Levy earned his first Monday Night Football assignment, calling the season-opening Denver Broncos vs. Oakland Raiders game with Louis Riddick and Griese. Levy has also called Broncos NFL preseason games locally in Denver with Griese since 2018. Following his NFL debut, Levy was named the lead play-by-play voice for 2020 XFL games on ABC, teaming with Greg McElroy in the booth. Throughout his ESPN career, Levy has handled a variety of play-by-play assignments, including the World Cup of Hockey (2016), NHL games (1995-2005) on ESPN, ESPN2 and ABC Sports, college football (1999-2002) – including launching the first-ever Friday night game package, and the NCAA Division I men’s hockey semifinals and finals (“The Frozen Four”) in 1998 and ‘99. Levy also served as the studio host for ESPN’s NHL telecasts and co-hosted The NFL on ESPN Radio — previewing, reviewing and updating National Football League games all day on Sundays throughout the season. Levy has the distinction of working the three longest-televised NHL playoff games in history – the five-overtime Pittsburgh vs. Philadelphia game in May 2000 on ESPN, the five-OT Anaheim vs. Dallas thriller in April 2003 on ESPN and the four-OT Pittsburgh vs. Washington contest on ESPN2 in April 1996. Levy, who celebrated a quarter-century with ESPN in 2018, originally joined the network as a SportsCenter anchor. An integral member of the flagship news and information show for decades, Levy still appears on the 11 p.m. ET edition or other late-night shows. He also holds the distinction of anchoring the very first show in SportsCenter’s new state-of-the-art digital center studios in 2014 alongside Stuart Scott. Levy has hosted SportsCenter from many of the biggest events in sports, including the Super Bowl, NBA Finals, Final Four, College Football Playoff, Monday Night Football games and more. He and ESPN hockey analyst Barry Melrose have notably covered the Stanley Cup Finals for ESPN for more than 25 years – every year since 1994. Prior to joining ESPN, Levy worked at WCBS-TV in New York as a sports anchor/reporter (1992-93) and as a Sports Desk host on the Madison Square Garden Network (1989-91). In addition to television, Levy worked in radio as a weekend sports reporter and host of The NFL In Action and various call-in programs at WFAN-AM in New York (1989-93). He also produced and hosted a nationally syndicated pre-game show on the NHL Radio Network (1988-89), hosted intermission updates for the New York Rangers and Knicks games, and he filled in as a host for SportsNight at WNBC-AM in New York (1987-88). Levy was also a part-time reporter for various sports events at WABC-AM while in college (1985-87). Levy began his television career at WTOP-TV in 1983 as an undergraduate at SUNY-Oswego. He worked at the station during his four years at Oswego State and was sports director for two years (1986-87). Levy also called play-by-play for Oswego State’s hockey team on WOCR Radio, and he had his own column “Levy’s Lines” (1984-87) and served as sports editor his senior year for The Oswegonian college newspaper. Levy graduated from Oswego State with a Bachelor of Science degree in communications with a concentration in broadcasting. In 1997, he received the school’s first-ever “G.O.L.D Award,” which honors an outstanding graduate of the last decade who has achieved prominence in his career. The school also honored Levy and expressed thanks for a donation in 2006 when they named the press box in the hockey arena after him. Levy has had cameo appearances in eight films, starting in 1999 when he played himself in the hockey-themed Mystery, Alaska. He has also appeared in Fever Pitch, The Ringer, The Game Plan, Tooth Fairy and Parental Guidance, Grudge Match and most recently Million Dollar Arm.

Book An Experience With Steve Levy

I will discuss my favorite moments of my 25-year career with ESPN and my other endeav...