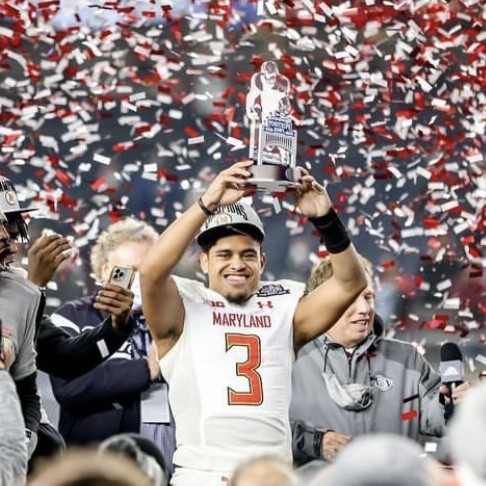 Taulia Tagovailoa is a redshirt Junior Quarterback for the University of Maryland. In 2021 Taulia had record breaking season, setting program single season records in passing yards (3,860), completions (328), completion percentage (69.2%), passing touchdowns (26) and 300-yard passing games (7). He Ranked top-25 in the FBS and top three in Big Ten in every passing category with 328-for-474, 3,860 yard, 26 TD season for the Terps. His completion percentage (69.2) ranked eighth in the FBS. He also stood top-10 in nation in passing yards (3,860) and completions per game (25.23). He was named New Era Pinstripe Bowl MVP after fantastic game to pace Terps to 54-10 win, completing 20-of-24 passes for 265 yards and two touchdowns while rushing for another 42 yards on four carries. Taulia Tied Scott Milanovich for Maryland’s single season passing touchdown record (26). He set the Maryland passing yards record with fantastic game at Rutgers (11/27) to lead Terps to bowl eligibility, throwing for 312 yards on 21-of-30 passing and three touchdowns while also rushing for 16 yards and a touchdown. He broke the Maryland single-season completion record vs. #8 Michigan (11/20) with 19 completions on 33 attempts for 178 yards and a touchdown, as well as 30 yards rushing and an additional touchdown. He set the Maryland record for most 300-yard passing games in a season with 350 yards and two touchdowns on 29-of-48 passing at #8 Michigan State (11/13) .

Book An Experience With Taulia Tagovailoa