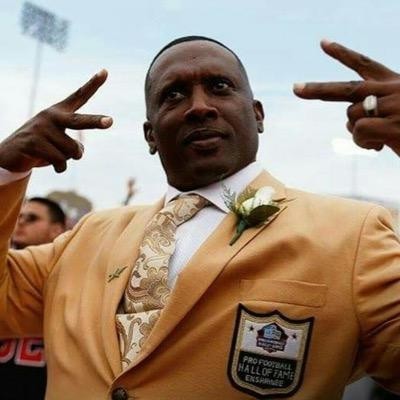 Tim Brown is a former NFL wide receiver and a Hall of Famer. The Texas native was a Heisman Trophy winner at the University of Notre Dame – the first wide receiver to ever win the award – and he was drafted 6th overall by the Los Angeles Raiders in the 1988 NFL Draft. Brown was a 9-time Pro Bowler in an incredible career spent entirely with the Los Angeles-turned-Oakland Raiders, with the exception of his final season in Tampa Bay. Brown holds several records, among them the most consecutive starts for a wideout (176) and the most consecutive seasons with 75 receptions (10) . He was inducted into both the College and Pro Football Hall of Fames, and in retirement he has appeared on TV as an analyst for both college football as well as the NFL.

Since his playing days, Tim has become an author and keynote speaker. In his book, The Making of a Man: How Men and Boys Honor God and Live with Integrity, Tim shares his amazing journey – the triumphs, the heartbreaks, the struggles with women, Al Davis, and God – as well as the principles and priorities that made him the man he is today.

Book An Experience With Tim Brown

Book Tim to keynote your upcoming conference, appear on your next...