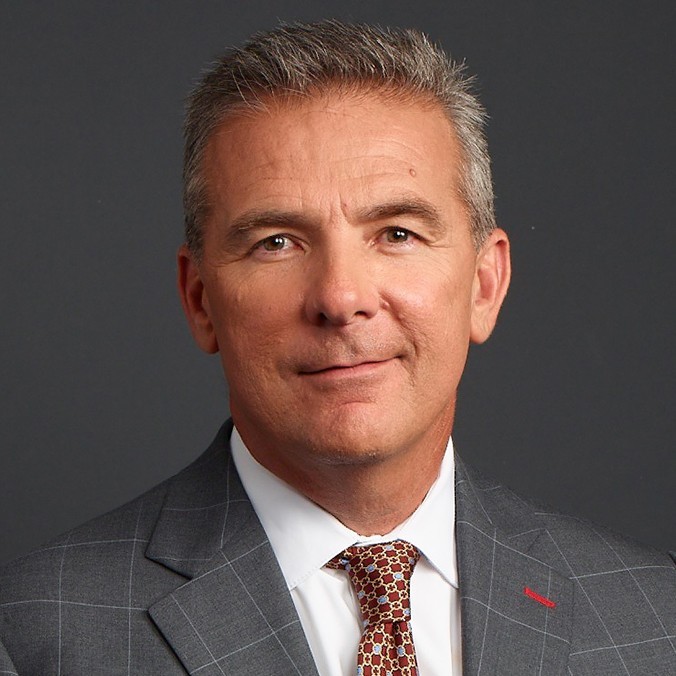 Urban Meyer is a NFL head coach for the Jacksonville Jaguars. He is a former college football coach and analyst for FOX Sports. Meyer’s 17 seasons as a collegiate head coach featured a record of 187-32 and positioned him with the third-highest winning percentage in college football history at .853, trailing only Knute Rockne and Frank Leahy. His teams were 12-3 in bowl games – second-best, all-time – and 27-3 in “rivalry” games.

Meyer started his head coaching career at Bowling Green in 2001, where he turned a BGSU team coming off six consecutive losing seasons into a Top 25 program with back-to-back 8-3 and 9-2 seasons. He then moved on to Utah and went 22-2 in his two seasons there, including a 12-0 2004 campaign that was the first of two undefeated seasons for Meyer. A six-year run at the University of Florida was so successful that both The Sporting News and Sports Illustrated named Meyer “Coach of the Decade” in December 2009. He guided the Gators to national championships in 2006 and again in 2008 and to a record of 65-15.

An Ohio native, Urban’s last NCAA stop was in Columbus and his Ohio State Buckeyes were a top program his entire time there. The team won the inaugural College Football Playoff national championship in 2014 and won Big Ten Conference titles in 2014, 2017 and 2018. His teams were dominant in Big Ten games with a best-ever 7-0 record vs. Michigan and a 54-4 overall record in Big Ten games, including an NCAA record 30 consecutive conference victories.

After stepping away from the sidelines and spending a few years in the studio with FOX covering the college game, Urban entering the NFL is one of the league’s major storylines heading into the season.

Meyer and his wife, Shelley, started the Urban and Shelley Meyer Fund for Cancer Research, which is a general cancer research support fund dedicated to advancing cancer research for all cancers. The fund helps recruit experts in the field of cancer research to The Ohio State University Comprehensive Cancer Center. The Meyers have three children; Nicole (Corey) Dennis, Gisela and Nate, and two grandsons: Troy and Gray.

Book An Experience With Urban Meyer