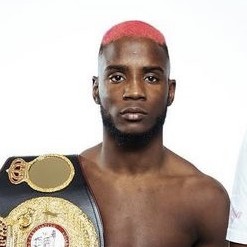 One of the Big Apple’s premier prospects, the flashy, multi-colored haired Chris Colbert has shown he's ready for "Prime Time," already picking up a world super featherweight title as he seeks to establish himself as one of the game's best.

The sixth-born of 10 children, Chris Colbert began boxing as a 13-year-old, becoming the No. 3-ranked 114-pounder, No. 1 at 123 pounds, later winning a National title in 2015 and earning an opportunity to qualify for the Olympics before turning pro at the age of 18.

Colbert’s skills were groomed at the Brooklyn-based Atlas Cops & Kids Boxing Gym, a mentoring center for neighborhood children. It is there Colbert met Mexican trainer and father-figure, Aureliano Sosa, the man who nicknamed him “Lil B-Hop” for skills analogous to Hall of Fame world champion Bernard Hopkins of Philadelphia.

Among the boxers featured in a 2017 Netflix documentary, CounterPunch, Colbert later became known as “Prime Time,” for his proficiency toward showmanship. “I feel like I bring everything to the table,” said Colbert of his ability to dole out punishment without receiving it, whether from close quarters or the distance. “I can bang, I can box. I can stand there and fight in the pocket. You’ve gotta be able to do it all.”

Book An Experience With Chris Colbert